How to sew bias tape straps 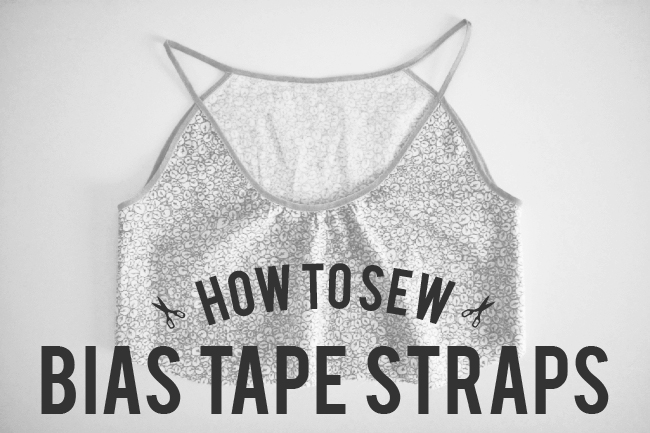 Today, we’re going to go step by step through the process of sewing the bias tape straps for Version 2 of the Dahlia dress. We’ll be using bias tape to both finish the raw edges of the neckline and create the straps.

As stated in the pattern, you’ll need 3 yards of ¼” double fold bias tape. You can use prepackaged bias tape, or you can go all out and make your own! Here is a tutorial for making your own bias tape. 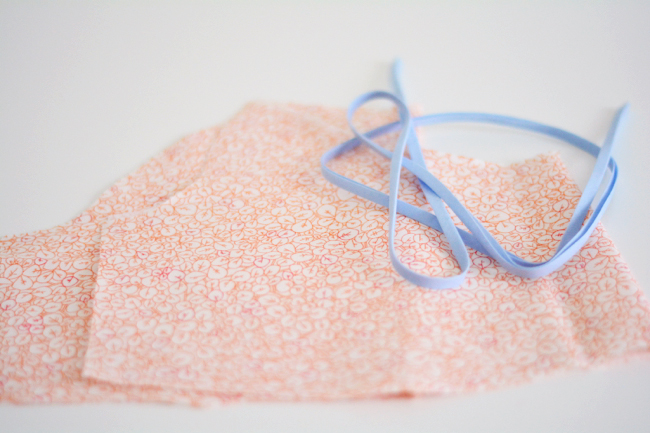 (In these photos, I’m using a bodice mockup to illustrate the process, but you’ll want to make sure you’ve completed all steps prior according to your instructions. Essentially, your dress should be nearly complete except for the neckline and hem.) 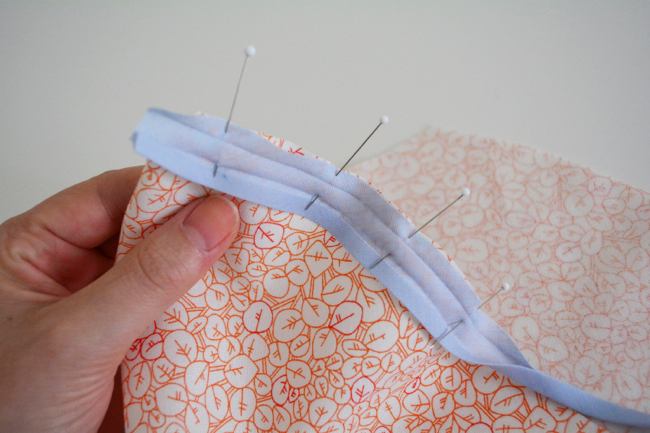 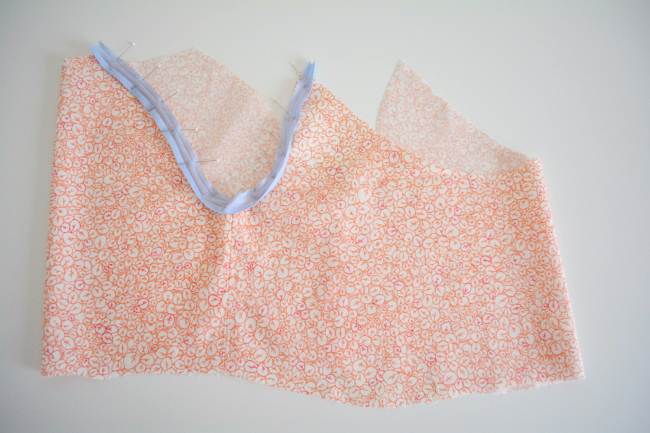 Stitch bias tape to dress following crease closest to the edge. This should be approximately a ¼” seam allowance. 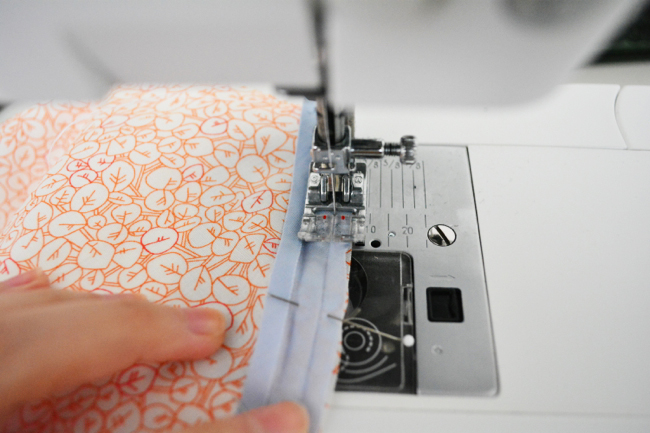 Refold bias tape on creases around the raw edge of the fabric and pin. 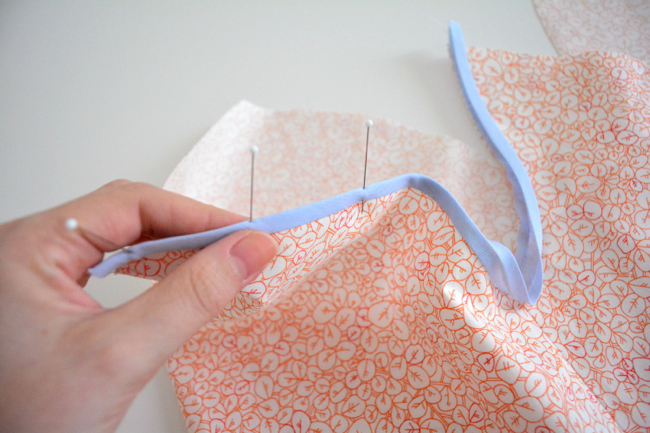 Edgestitch along inner edge of bias tape through all layers. 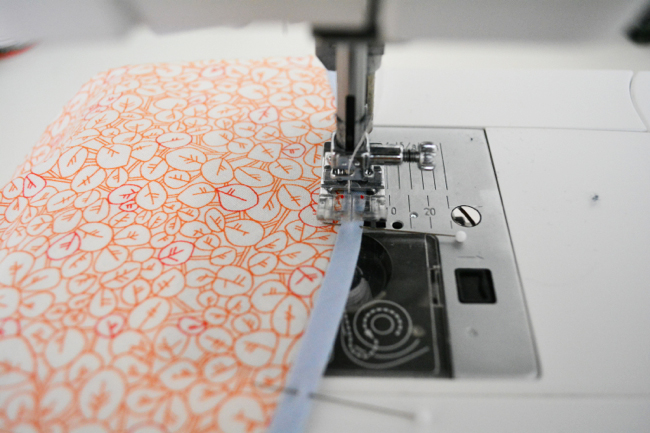 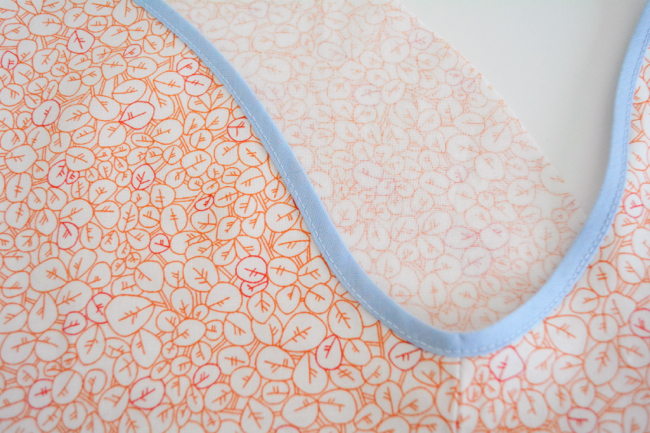 Repeat with other underarm seam. 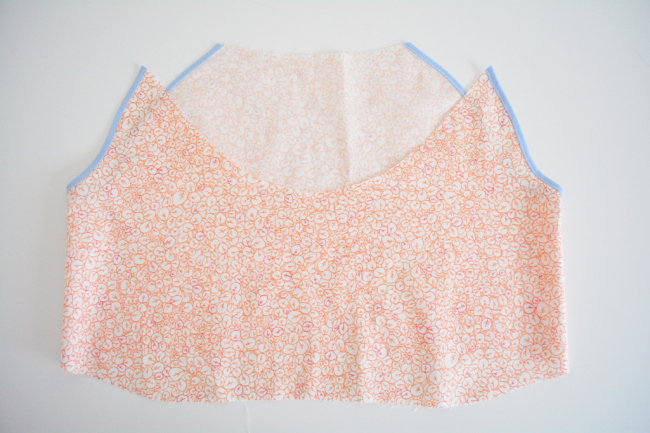 ATTACH FRONT AND BACK BIAS TAPE

Sew two parallel rows of basting stitches between dots on bodice front. Pull threads to gather fabric down so that it measures 6” between the dots. Anchor threads. 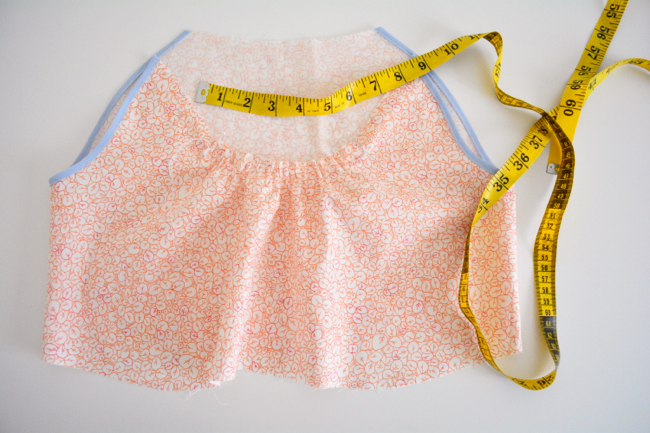 Cut a piece of bias tape that is 5” longer than the back neckline edge on each end. 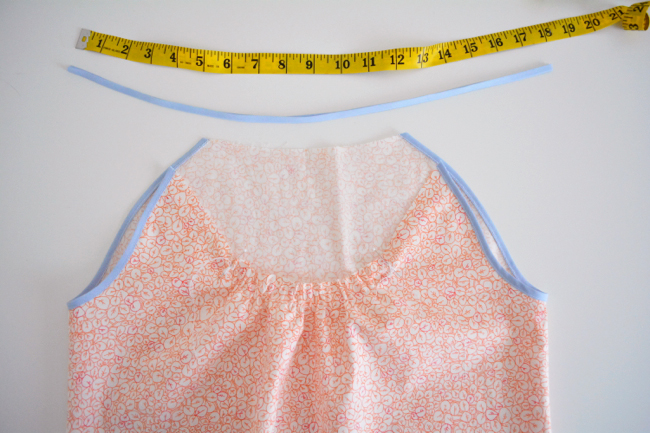 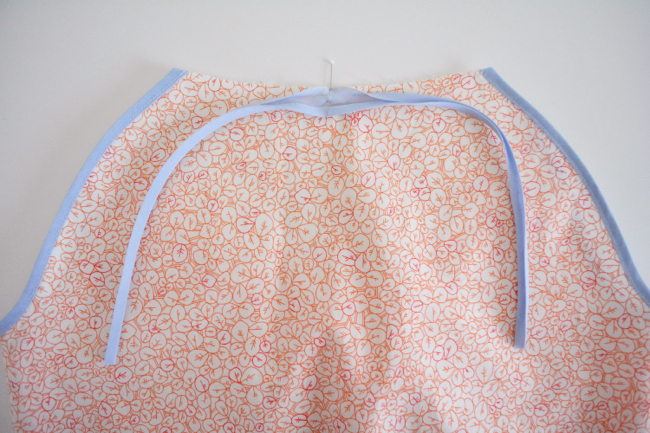 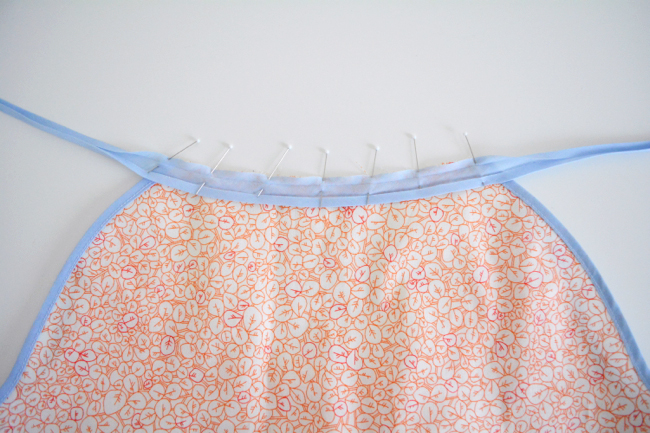 Stitch in first crease along entire edge to attach bias tape to bodice just like you did on the underarms. Stop there – we’ll be refolding and topstitching the bias tape later. 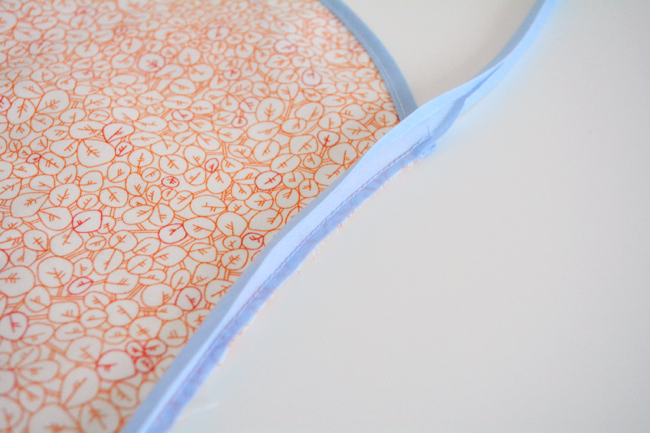 Repeat to attach bias tape to the front in the same manner. Again, don’t topstitch yet. 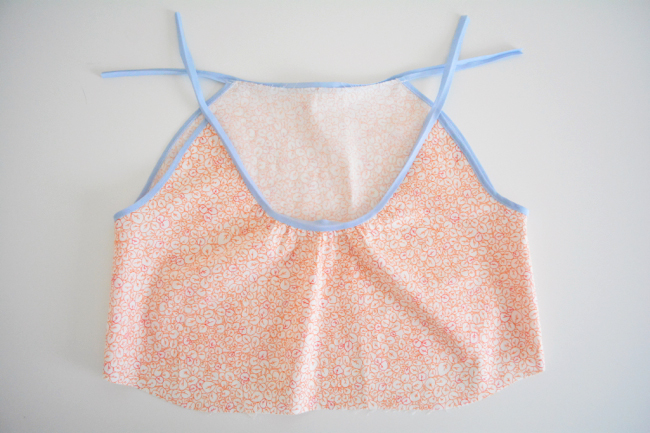 Mark 3” down from end of each strap. Open bias tape all the way and pin right sides [fold sides] together, being careful not to twist straps. 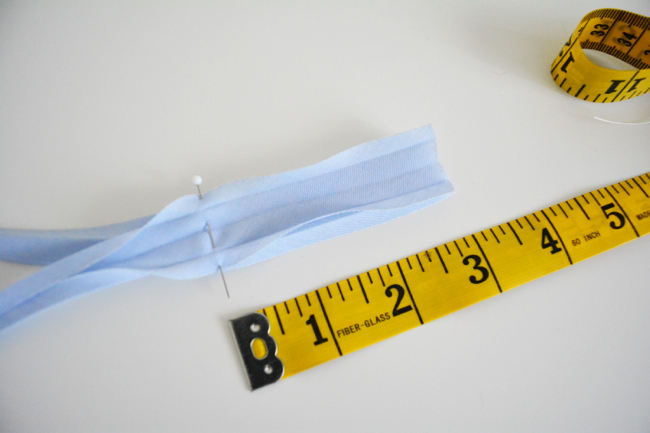 TIP: Mark the outside of each folded strap near the ends and match the marks when you pin so you don’t accidentally create a twist.

Try on dress and adjust straps if necessary. Stitch straps together and trim excess to ¼”. Gently press seam open. 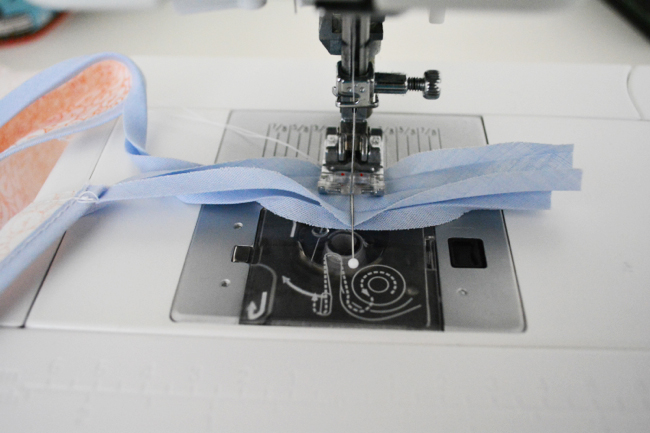 Refold bias tape on creases all the way around neckline. Repress if necessary, especially where straps are joined. 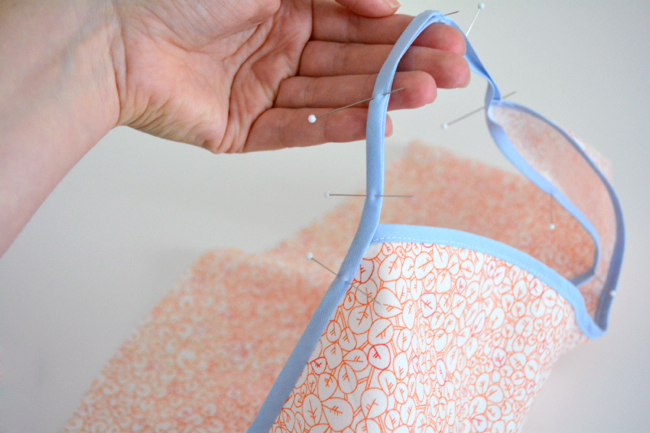 Starting on the back bodice, edgestitch along bias tape all the way around the dress, stitching along back bodice, first strap, front bodice and second strap. Go nice and slow when you’re sewing the straps. 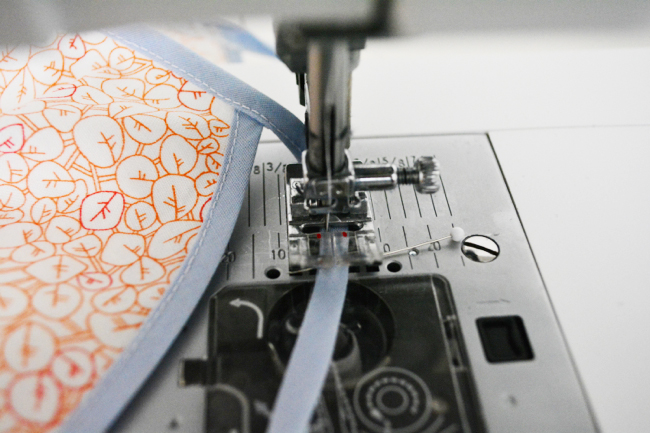 Clips all threads and press gently. 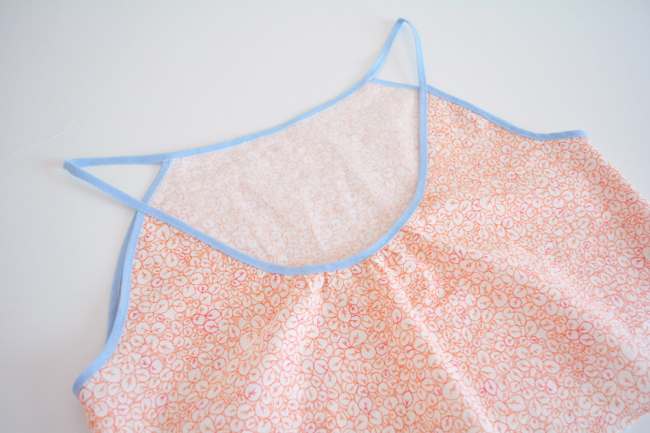 Raised on a farm in Ohio, Devon moved to Los Angeles for college and worked in the film industry for several years. She has taught sewing at various shops throughout Southern California and at the Craftcation Conference in Ventura. She now resides and teaches in Nashville. When not obsessively sewing she can be found knitting, baking, and drinking wine with her cat.

Of course! you need sharp thin pins, that is where I am going wrong. Great tuto. Jo x

Thanks for your huge generosity in sharing. I am really looking forward to the sew-a-long. Have already downloaded pattern and working with plaid guide – all I need now is the hand holding!

Great tutorial, the pictures are wonderfully clear! I would join the straps with a 45 degree seam as the 90 degree seam feels bulky inside tiny little straps, but it is very easy to twist them when sewing that way, hmmm. Can’t wait for more dahlia tutorials :)

Love the process of making and sewing bias. Maybe I just think facings are too much trouble. Now I am tempted to start something that requires some bias treatment. You guys do a great job of showing and explaining how to do bias. Well, just about any sewing technique, great job!

You didn’t include how to end the underarm edges so that they look flat and professional. I would love to see how you finish this step. Thank you.

I’m sorry, I should have said that I realize the tapes edges aren’t closed up where the underarm seam meets, but I would like to see a tutorial on how you handle this.

Sorry Amy, I’m having trouble understanding. The edges of the underarm bias tape are enclosed by the bias tape that forms the neckline binding/straps.

Ditto Tanya’s technique – you’re sewing the seam on the grain, which prevents most poochy seams AND the seam goes around at an angle for less bulk. I’d bury it on the body somewhere, on the back. Pin it all out, measure, sew. You can always try it on when it’s half sewn (before the foldover) to check.

I’ve ended up threading yarn or narrow ribbon into the straps to keep them from stretching out over time (used a crewel needle for both). Of course, you’re not keeping this dress on the hanger in the closet to exacerbate that. Of course. And it’s something you can go in and do later.

SJ Kurtz – neat tip about threading yarn or narrow ribbon to keep them from stretching out over time. Thanks!

I have a quick question. I have a largeish chest and usually prefer a slightly thicker strap so that it might hide a bra. Do you think this would work using 1/2 inch bias tape? Would that make a thicker strap or am I wrong?

This came at the right time – I am new at sewing. I have a pattern for a blouse that requires bias tape. I feel a little intimidated.

For the last half=century or so I have been sewing. I wish this would have been available when I first started stitching. Your explanation is super—neat, clean, uncluttered and the accompanying photo shots really do it. You have done a great job…this is my first real view and I am impressed to say the least!! Keep up the good work, please. (
Now I know if I have a problem who to call)