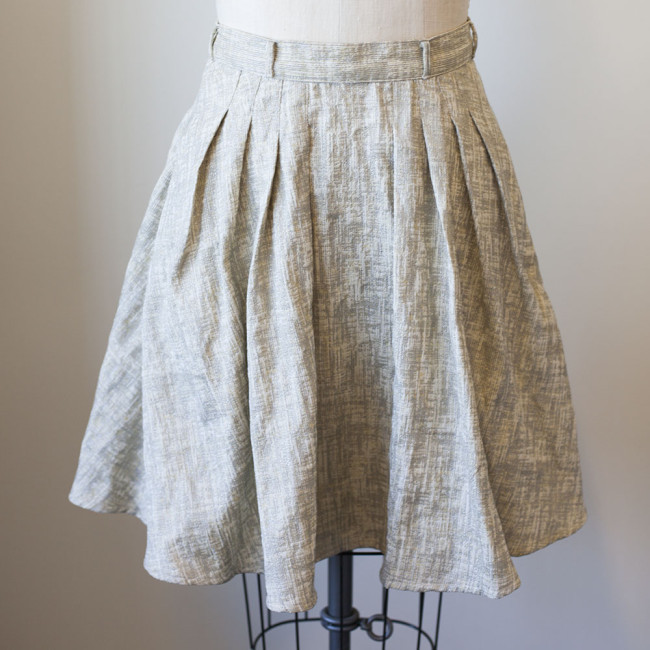 I used to have issues with pleats.

I don’t mean sewing them, I mean wearing them. After a brief infatuation with pleated plaid schoolgirl skirts (I was a teen in the 90s, after all), I realized that for the most part, all those folds around my waist and tummy weren’t really doing it for me.

But I’ve since learned a lot about how to work with pleats, and the truth is that it’s all in the execution.

A loose pleat that’s just folded and sewn into the waistband can feel like a little much for those of us with roundness about the middle, especially in a bulky fabric. This kind of pleat is sometimes referred to as a released pleat or an open pleat. 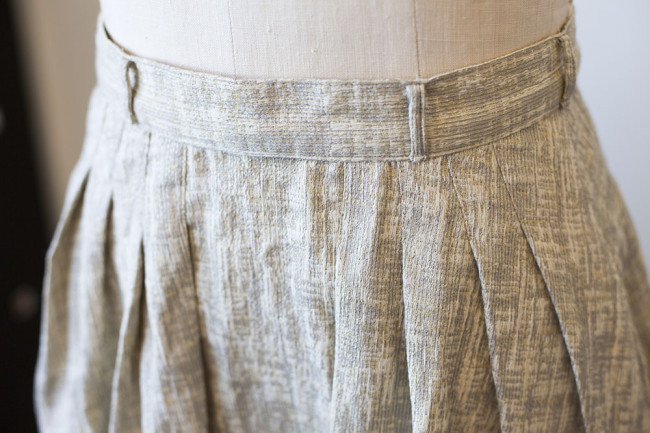 But If you stitch that pleat down, the effect can be dramatically different. The pleats can form a really flattering shape around your upper hips, almost like a skirt yoke, before flaring out into a full hem. You get all the lovely fullness of a full skirt, while still giving some definition to your waist curve.

These partially stitched pleats technically should probably be called tucks rather than pleats, because they’re stitched together before releasing the fullness of the fabric. But most of us, when we see them on a skirt like this, think “pleat.”

Getting the right fit

Now, here’s the thing about sewing pleats (or tucks). They can go wrong pretty easily.

Why is that? Well, you’re typically working with a bunch of them on any given garment. If you’re off just a little bit when you mark and measure those suckers, you can end up with pieces that don’t fit together.

Let’s say you’re working on a skirt with 12 pleats in it, like Zinnia. If you mark each of those pleats just 1/8″ too small, you could end up with a skirt that is a full 1 1/2″ too small for your waist. Yikes.

But you can prevent this with a little careful measuring and marking. I’m going to be showing you how I sew pleats and minimize measuring errors for a good fit. 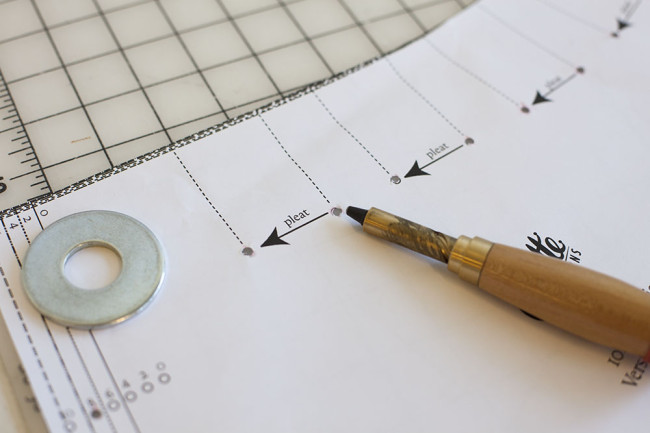 1. My favorite way to mark internal areas of a pattern is to punch a hole where I want to mark. I use a screw punch, which is really handy, but you could also cut a slit or small hole. 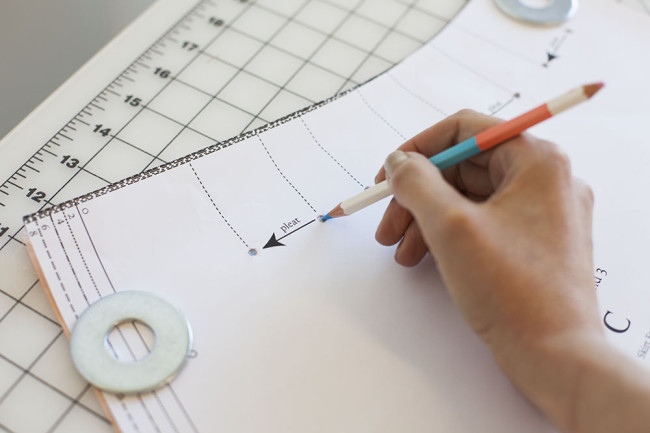 2. After cutting your pattern out, use a fabric pen, chalk, or pencil to mark the bottom of the pleat. Be sure to make your markings on the wrong side of the fabric. 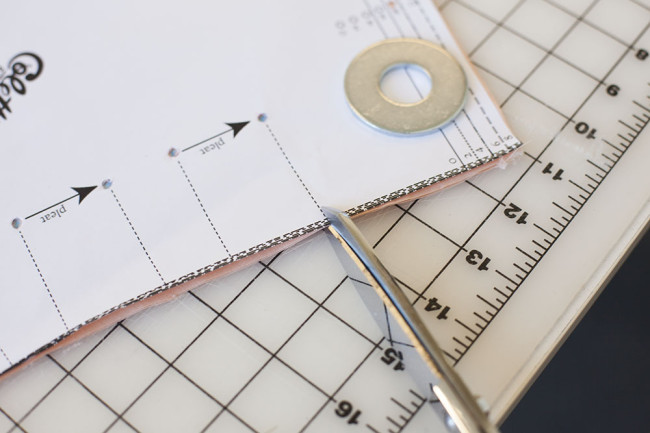 3. To mark the top of the pleat, cut small snips into your fabric. 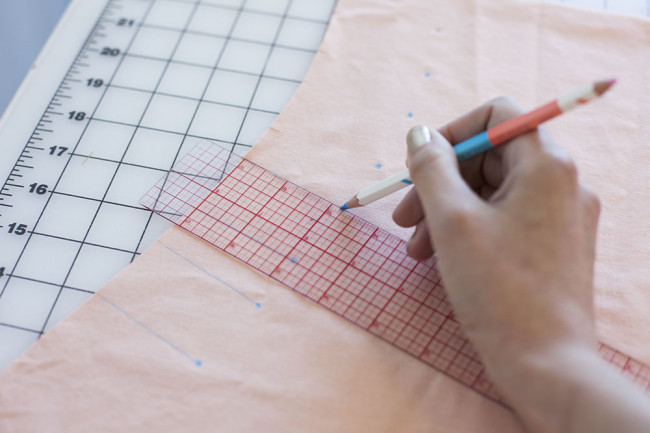 4. Connect the top and bottom of the pleat with a straight line, using a ruler and your pen, pencil, or chalk. 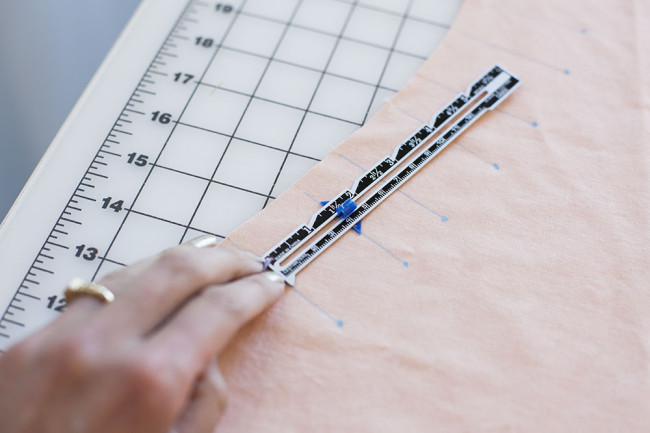 5. To be extra careful, remeasure to make sure that the distance between the pleat lines is the same on your fabric as the pattern. It’s particularly important to get it right along the seam line. 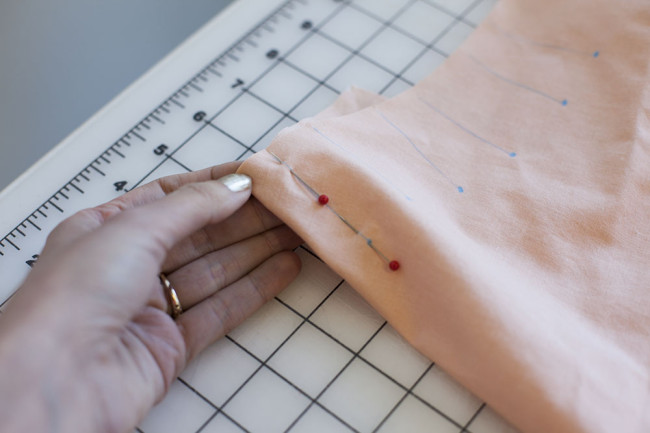 6. Pin the lines of the pleat together, with right sides together. Stick your pin right through the line on each side of the fabric. 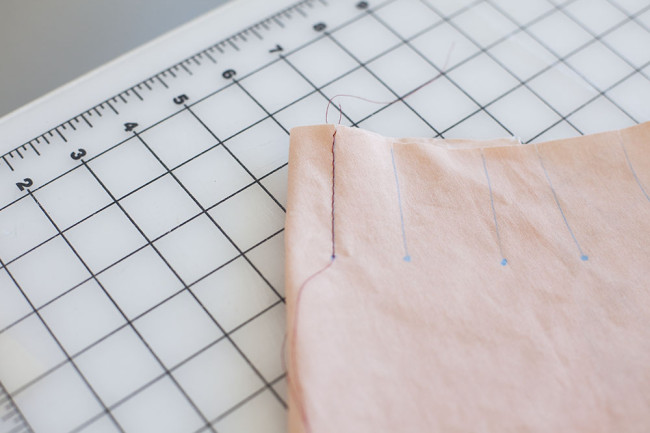 7. Baste down the marked line, from the top to the bottom. 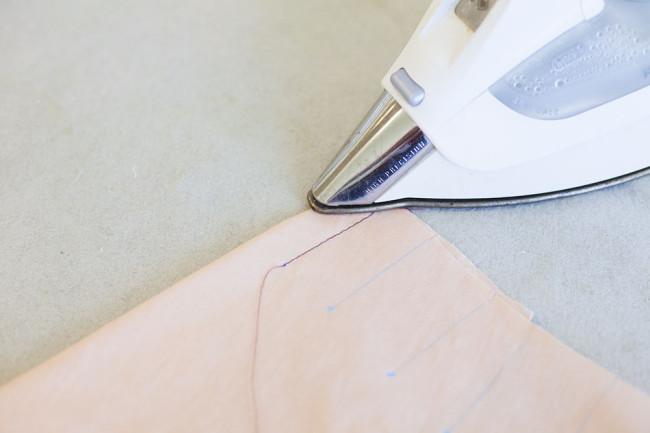 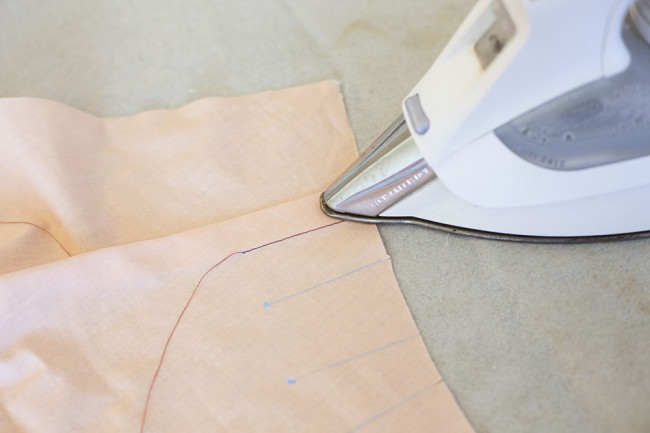 9. Fold the pleat towards the side seam of the garment and press again. 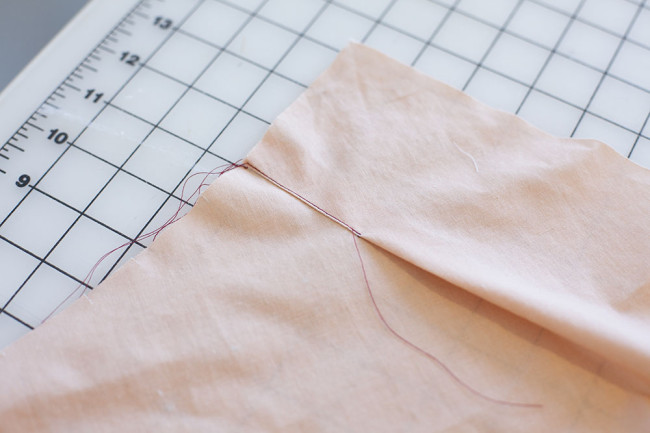 10. Edgestitch along the fold of the pleat, from the top to the bottom of your stitching. Backstitch when you get to the bottom. This will hold your pleat in place, and keep it nice and flat and crisp. Remove the basting.

Note: You don’t necessarily need to edge stitch them, but I like it. If you want to skip step 10, just stitch them in place instead of basting in step 7. Backstitch at the bottom, or pivot and sew to the edge of the pleat fold. 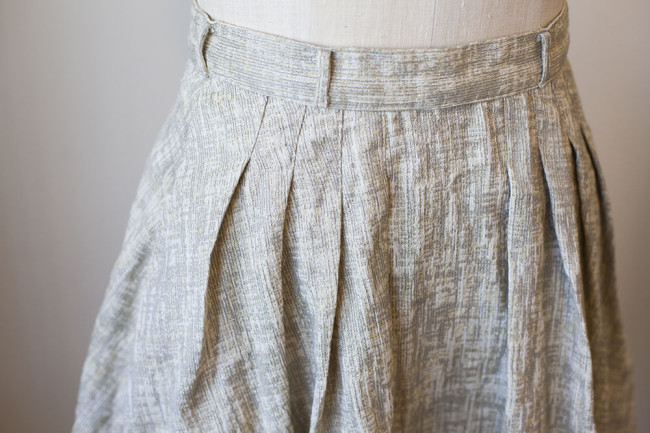 But I do love a good topstitched pleat. So nice and crisp.

Oh, those pleats/tucks are gorgeous! I love them topstitched..looks so crisp and flattering.

Thank you – this is very sensible.

I make tucked pleats very often because I love they way they look, but I never even thought about basting them first, which is a great tip! I usually just pin them in place, but basting them would really keep everything nice and tidy. Thanks!

Can you tell me a bit more about that fabric? Is it a linen blend? Would you consider it drapey? Is it quite lightweight so the pleats don’t feel too bulky? I’m just trying to pick out fabric for my zinnia (just ordered it!) and always appreciate some guidance.

I believe it to be a linen/cotton blend with metallic flecks.

It is definitely not drapey, it’s actually very crisp. But it isn’t too thick, and I think that is really key for a skirt like this.

You can go with a drapey fabric, or you can go with a crisp fabric, but I’d stay away from anything too thick and bulky. For example, someone on Facebook asked about corduroy, and I advised against it because cord adds bulk.

If you’re unsure, fold a bit of the fabric and see how a pleat would look in it! Also check if it will press well (I’d avoid anything with too much polyester for that reason).

I think you might be selling me on this skirt ;)

I’m wondering if it might also help to alternate the color markings of the pleats. When the spacing between and the pleat size are similar and you have to walk away from the project for a time it’s quite possible to accidentally sew the spaces together instead.
Yes, experience speaking…. < : )

I think that is a fabulous tip! I know I’ve made that same mistake myself.

I also find that marking in the little arrows that tell you which way to gather the pleat helps differentiate between the pleats and the spaces.

I just ADORE your tutorials! They’re so clear and precise, without being intimidating. In fact, every time I put in an invisible zipper, I pop on over to your video tutorial. Thanks!

I agree, that invisible zip video tutorial of yours is pure genius! It’s the only one that made any sense to me, and I also refer to it on every zip insertion.

Great tutorial (and gorgeous fabric)! I’m always a bit intimidated by pleats, but this makes it seem a bit easier.

Speaking of tools (I just got my very own screw punch the other day, can’t stop using it on every random scrap of paper that passes before my eyes), is the double-ended colored pencil anything special? It seems useful!

Aren’t the punches so much fun?

The pencil is the Clover marking pencil. They’re my favorite!

Awesome, thank you! It’s time I got some real marking tools, that those look like just the ticket.

Thanks for the tips! I can’t wait to make this skirt! Do you know when the stockists (Pink Chalk or Grey’s) usually get your new patterns in? I can’t wait to buy this, but I just can’t justify the $13 for shipping. Do you think you might add regular letter mail to Canada as a shipping option at some point in the future to bring the cost down?

My shop, Linnie Darling, has the Zinnia. First Class International to Canada is $8.16.

So clever. Such a simple (obvious?) solution that I’d never have thought of. Not even sure if I’ve seen this detail in RTW skirts. Can’t wait to try it out now, thank you!

this really is the perfect skirt! great tutorial too.

Great tutorial! So nice and clear and for me a sensible solution to the tummy emphasis problem.

Yup, that’s my concern with pleats in skirts, right there–making curvy, significant hips even more curvy and significant visually. So I usually stitch down pleats, too, but I find that I need to make a muslin to get the length of the stitch-down right for my proportions.

Thanks for the great tips!

I love the look of edge-stitching. I have only done it on one garment, but hope to use it a lot in the future. I think it really adds a finished look.
Love the tutorial!

Thanks for yet another interesting and useful blog post, Sarai! My fitting issues are actually on the other end of the spectrum, i.e. I’ve got a very boy-ish figure and would love a way to fake some curves. Maybe switching to an open pleat might do that for me? Perhaps I’ll try both closed- and open-pleated versions to see what works best.

Will you consider creating a tutorial on how to cut and sew chiffon. I would love to make Zinnia in version 3.

Yes, I really want to do this! I’ll add it to my list, because I have some good tips.

Thanks much! Your pleating instructions are the best that I found so far on the web. ANd what a great skirt…how can I get the pattern??

Hi! I have on the table my zinnia version 3, but yesterday I have stopped and don’t know how to do this.

The instructions say that with the lining and shell together, I have to stitch the back seam closed below the zipper. Two steps later it tells me to trim the lining 1″. I’m really confused about this. Would you help me?

Yes! Unfortunately, this was a bit of errata on some of the first patterns. The lining should ideally be hemmed before sewing the back seam, but if you’ve already done the back seam, it’s an easy fix. Just unpick a few inches, trim and hem the lining, then finish the back seam.

If you haven’t done the back seam yet, just be sure to trim and hem the lining before doing the back seam and you will be fine. Sorry for the mistake and confusion!

Fortunately I haven’t done the back seam yet, so it will be easier :)

Thank you so much!

THIS is amazing…and I’m pretty sure you are too
I just checked out your Pinterest page and although I am excited about all the new boards I am following and all the cool ideas and tips I will learn….I am also super jealous!!
You are like an edgy Martha Stewart, but better…like if Martha Stewart grew up in the East Village of NYC…or something like that
CIAO