Inspiration tools on the web

I am a hoarder of images. I love to collect visual inspiration, particularly for sewing ideas. But with the unending supply of beautiful inspiration sources on the web, the amount of input can quickly become overwhelming. I’d like to share some online tools that I’ve used to help manage and collect all of that inspiration. 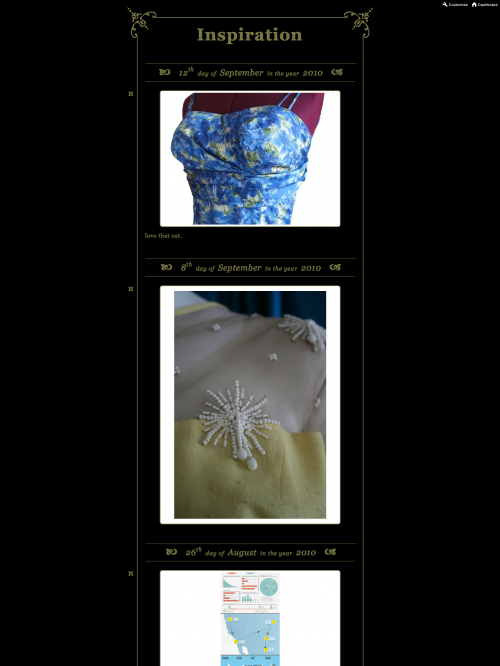 I’ll start with my favorite. Tumblr is a service that lets you quickly and easily blog individual images. With each image, you can add notes and, best of all, tags. I think tags are the real benefit to using Tumblr over just saving an image to my desktop, because I can tag something “skirt,” “pleats,” and “vintage.” When I want to look for skirt ideas later, I just click the “skirt” tag.

I use Tumblr in combination with a Firefox extension called Tumblr Post. Tumblr Post lets you just drag images from a webpage to an icon, and they will automatically be posted to your Tumblr blog and link back to the original.

Even if you don’t want to have a public blog, you can make your Tumblr blog private and just use it for collecting personal inspiration!

Pinterest is a new site specifically made for cataloging and sharing visual inspiration, and it’s frequented by some people with awfully good taste. I must say that so far, I like it best for looking at other people’s inspiration boards, but haven’t gotten into the swing of using it for my own. Still, it’s a pretty fun option and I’m definitely going to keep using it. 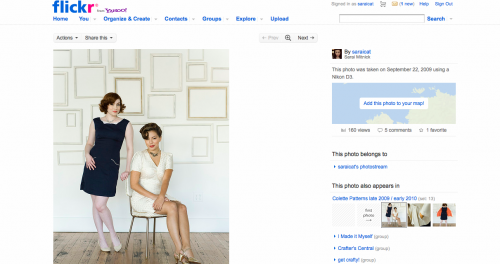 Where would I be without my beloved Flickr? It’s an amazing resource for images, but you can also use it to pull together inspiration. Flickr lets you create small “galleries” of other people’s images, collect favorites, of upload your own into sets and collections, all with tagging capabilities. 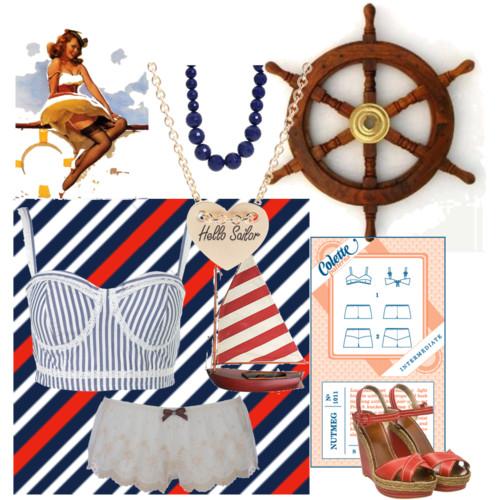 Polyvore lets you create fashion collages from images and products all over the web, with an easy drag-and-drop clipping interface. Polyvore is useful for putting together a wardrobe or outfit, so it’s a little different than the straight-up image gathering of the other tools. It’s more of a fun way to process ideas than a way to collect them.

So that’s basically the stuff I use. What about you? How do you keep up with the vast quanitites of sewing and fashion inspiration out there in internet-land?

I’ve been pretty much a Flickr gal up until I started using Tumblr regularly this year! Between the two, I find that I can keep most of my internet inspiration handy. As much as I’ve tried the others (like Polyvore), I end up being overwhelmed and just sticking with the two that work the best for me. ;) At least having a web-based inspiration folder helps relieve the burden of filling up my hard drive with images! lol.

I used to download images to my computer. More recently, I’ve been using Evernote.

The sources you use look good, too.

My husband uses Evernote and seems to like it, but I haven’t tried it out yet. Good suggestion.

Wow, just signed up on Tumbler – can even post from email. Will have to investigate further, but yes, seems very cool and useful so far! Thanks!

I kept wondering the purpose behind tumblr…What a fabulous idea. This a great post. I love hearing about how you collect ideas and getting the input from others as well.

Thank you! Why keep stuff on my hard drive when I can leave it elsewhere to be accessed from other computers?

I use all of the sites you mention. This is really good of you, though, to tell people. I’ve received a few emails from people who are new to it. I wish everyone had been as generous as you are a few years ago. I’ll send folks your much better organized post (than my email of ‘how to find images”).

Pinterest is fun, I just haven’t had a chance to do much yet. Goodness, I praise all the tumblrers, & so on who make their collections available to those of us who are looking for specific (often last-minute, ahem) posts. Thank you (I always say who they are, of course.)

I use Evernote for work things + books I wanna read (when you’re out and someone tells you about a good book!) but use tumblr for great clothing/style/colours to be inspired by… but I like the idea of Pinterest, the layout looks dreamy…

I love to use tumblr as an online catalog of all things cute. Does anybody have an invite to pinterest?

I use tumblr for storing the images i really like, and as my blogging interface (very versatile indeed), but really to keep the “little things” on hand : for exemple, the shape of the neckline of a dress I saw on etsty, a pattern or a colour i like… I much much prefer evernote, there’s something about the flexibility of the organization, that’s a lot more practical : you can organize them by period of time and tag, obviously, but you can also vary the size of the thumbnails, edit the notes a lot more easily…
Pinterest looks nice too, I might try it too, someday.

Pinterest is great! Took me awhile to get it going, but I like the community side of it and being able to see what others are pinning. It also had an extenstion to just “pin” things.

Just found your website and really appreciate all the great tips. Just retired from retail management and am looking forward to expressing my creativity through sewing, designing, crochet and knitting. Where will I get all the time.

Your site is very helpful and I love the patterns that you design. :)