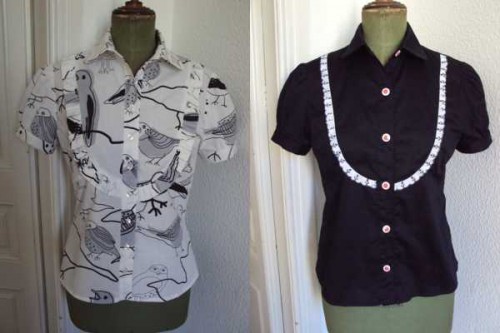 This weekend I undertook the interesting (to me) task of laying out all my me-made garments in preparation for my Me-Made-May challenge. I’ve never seen them altogether before, and was surprised to see how many ‘multiples’ I’d created. By that I mean garments that used the same pattern for their creation, either ‘straight up’ or with modifications. The realisation was forced upon me that if I have made a garment that I deem even a half-success, nine times out of ten I’ll make another. The second (or third etc.) version will be in a different fabric and usually with some alteration for improved fit and/or to create an alternative style (this post is illustrated with multiple versions I’ve made to help explain).

Let me break it down. Maybe you’ve gone to the effort of making a toile/muslin to achieve a well fitting garment, or maybe (if you’re anything like me) you’ve gone straight ahead with your ‘good’ fabric with plans to approach any necessary alterations as you go. Either way, you have battled potentially confusing instructions, figured out how to the 2D pieces fit together to make a 3D object and in what order and probably learnt a fair few lessons along the way. You’ve come out the other side with a new garment, is it not a natural reaction to make another? I’m not talking about necessarily back-to-back projects from the same pattern (though has anyone done that?). But, wouldn’t it be nice to undertake a project that you KNOW doesn’t contain any nasty unexpected fit problems or morale-reducing construction-based frustrations?

However, is this reaction the norm? Do all sewers make the majority of their projects at least twice? Personally, when I plan my next sewing project, the decision to try a new pattern or radically alter one compared to remaking a tried and tested one is the equivalent of deciding if I want to watch a challenging documentary or an enjoyable but predictable feel-good movie. There’s certainly the right and wrong times for each. 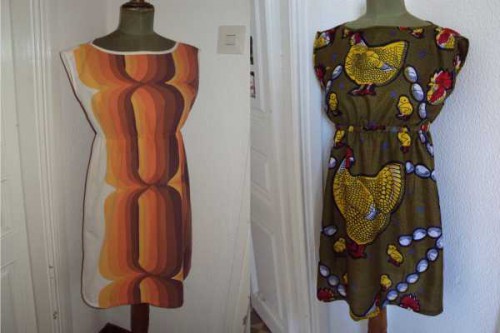 But maybe I’m a more extreme case. As soon as I see a pattern I like, my mind automatically starts to mull over all the variations I could extract from it before I’ve even bought the damn thing! And my interest in this extends to other people’s creations too. When I saw Cecili from Sewing and Sew On‘s beautiful Simplicity dress created from a vintage pattern that she worked hard to perfect, I immediately left her a comment as I had the uncontrollable urge to know if she was going to make it again. She responded that she was going to make another with an alternate sleeve, and upon reading this I felt a giant ‘YES!’ rush through me! Is that wierd?

Of course you can tweek, alter and modify a pattern so much that the results are virtually unrecognisable from the original design. But how many times is too many times? My personal record for making variations is using Simplicity 3835 seven times! And I must admit I have at least one more variation in the pipeline. (Actually, this range of patterns has its own own Flickr group, like the Colette Patterns’ one!) Can anyone beat seven? I think when you remove much of the challenge from a sewing project’s construction, you automatically replace it with a new challenge: ‘How many times can I make variations of this pattern before somebody notices and says something?!’

Flickr groups, Burdastyle’s project archive, Pattern Review and the Colette Patterns gallery are awesome sources for seeing other people’s interpretations of a pattern that you own or are interested in. But for me, what with my apparent multiple-pattern-variation obsession (MPV for short?), these sources can lead me into obsessive overdrive with all the options and possibilities presented. I feel this post has been cathartic, thank you for your time. What would make this therapy truly successful is to find out I am not the sole bearer of this affliction!

Oh, I almost always make a second and sometimes third version! If I spend that much time getting something to fit (and I have to make a LOT of fitting alterations!) and figuring out the pattern and so forth, I want to reap the rewards of that investment!

It’s almost like having a bunch of slopers–you know a “TNT” pattern fits/works, and then you can just play with fabric, style changes, trim, etc.

I have made Simplicity 3835 four different times (with varying degrees of success). I plan on making a few more versions of the Sencha.

It’s exactly like buying multiples of the same clothing in the store! When you find something that works, you stick with it!

I am very guilty of making the same thing over and over. It is a great way to explore a particular cut/fit and reward your effort in getting the muslin right.
I also tend to buy multiples when I find something I like that fits well. What better way to be comfortable and look presentable without having to think about it?

BTW, I love the bird fabric on the upper right blouse.

I draft my own patterns and I have to say I tend to re-use successful bits quite a lot. The right panel shapes for a tailored jacket, an unusual sleeve-shape I managed to make work etc. With basics, I sometimes find myself re-using the exact same pattern over and over again. I’ve made my favorite flared trouser pattern three times now, and I’m sure there will be many more.

I definitely use patterns more than once. My personal record is I think the Barcelona skirt by Amy Butler – just a simple a-line skirt. I’ve made five in all. One has a waistband and another has a button placket instead of a zipper.

I’ve also already made two Senchas. I’m also going to make another parfait, when I get around to tweaking the pattern a bit – the first one fits ok but just ok, I need to do a little LBA on it and adjust it for my height.

I love using a pattern multiple times. If it’s an especially good pattern, it’s the joy of knowing I’m onto a good thing, if it’s a tricky one, it’s the challenge of making it work for me. I also feel like the more I use a pattern, the more I’m getting my moneys worth. Even if I thrifted it for 50c, it’s kind of cool knowing it really was an awesome bargain.

I do the same thing, not that there’s anything wrong with it! To me, if I made it once and it worked, then it’s a guaranteed successful second project. It’s like finding the perfect tee shirt and buying a few in different colours. If it works for you, then why not? Especially if I spent a lot of time perfecting the fit, or if I received a lot of compliments on the finished item. If I really liked the first version in a print, I know I’ll like a solid version too. I agree with Amie about wanting to get your money’s worth as well!

I’ll only purchase a pattern if I can see making several versions of it!

I’m a total weirdo here is seems. Now I do make some patterns many times. Mainly tee shirts. But I seem to have a real psychological problem with making most things more than once. It bores the heck out of me. In fact, I often make more errors on #2 than I ever did on #1. Guess I just can’t pay attention. I guess I’m a good customer for pattern makers though.

I know exactly what you mean, I’ve made (or have planned to make) multiples of heaps of my patterns. Often I’ll deliberately make a pattern up in a cheap fabric first to check that i like it and the fit and the contruction etc before i make it up in another (usually more expensive fabric). Either that or I love it so much i make another, and another and another. I have 4 variation on what is essentially the same flared gored summer skirt – and three of them are probably some of the most worn garments in my summer wardrobe. So no, you’re not alone!

What pattern did you use for the dress in the bottom two pictures?

You’re not alone! I own over 300 patterns yet I seem to rotate from the same 15 instead of trying one I’ve never tried before. If you’re a working gal like me, with limited sewing time, I guess you tend to gravitate towards what you know will work without a hitch.

300?! At first I thought ‘Woah!’, then came envy, then came the realisation that if you include Burdastyle downloads and my favourites from the Burda mags, I probably have close to 150 myself! That’s an eye openner. Everyone has made a very good ‘pro-multiples’ case

I usually plan on making a second version, actually doing it is another story.

What pattern did you use for the blouses at the top? I really love the ruffle on the yoke and the whole look of the blouse!

Hi AmyLou, many thanks! I used a pattern from 1/2008 issue of Burda magazine. I added the ruffle myself (it’s not included in the pattern), which was easy enough to do. I think it makes the yoke stand out nicely. All the best

I definitely reuse patterns over and over! Once I find something that fits well, looks good and is relatively easy enough to put together, I stick with it. I would definitely have 100+ patterns, but again, I stick with about 20 or so that I know work. There’s plenty I want to try, but the idea of having to make up toiles and play with the fit always puts me off!

Simplicity 5006 is my most used one. I’ve made the corset about 6 times now (I do costuming though!) and the skirt (simple A-line) I’ve actually lost count on how many times I’ve used and modified it! I like to cut out lots all at once too, since that’s always the most time consuming part for me. Earlier this week I laid out 4 pieces of fabric, pinned on the pattern, and cut them all at once! I managed to get one skirt sewn in 1.5 hrs! The other 3, I plan to sew all at once. It definitely streamlines my sewing process!

If I like how something turns out, there’s a good chance that I’ll make it again, at least once or twice. I tend to sew the same patterns for my husband over and over again (due more to the lack of men’s patterns than anything else, though, I guess). I think I’ve made him the same Kwik Sew t-shirt about a dozen times and about 20 pairs of boxers from the Timberlane Press pattern over the years!