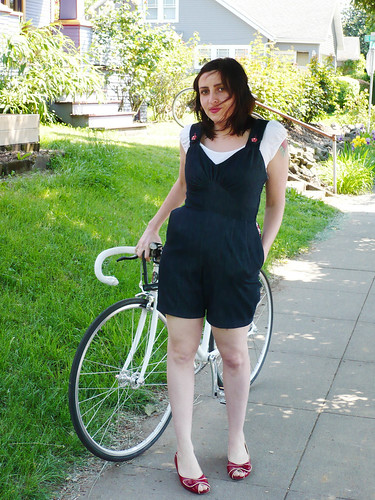 This is my new playsuit/overalls! I’ve been wanting a cute vintage style denim playsuit for so long. I’m generally a dress/skirt girl, but there are certain things that are just not as easy in a dress. Riding my bike is one of them.

At some point, I realized that the Parfait pattern would look awesome as a playsuit. Then I realized that I had this heavy, dark vintagey denim in my stash. And these awesome vintage red and white buttons. And a cherry print cotton that I bought at Joann in the 90s, which I used for the in-seam pockets. So this whole thing was kinda-sorta free. 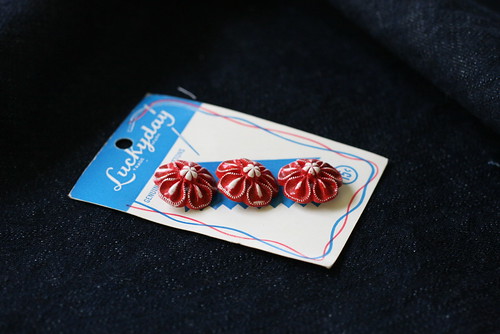 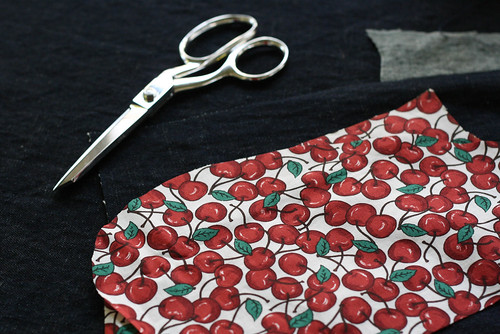 To alter Parfait, I just used a shorts pattern from the 1950s that I had and bolted that on to the bodice. The 50s shorts are a little odd, they tend to exaggerate the hips a bit which I don’t particularly mind, but it’s not a look for everyone.

I did the buttonholes in red, frankly because I ran out of the heavy navy thread I’d been using. But I like it! 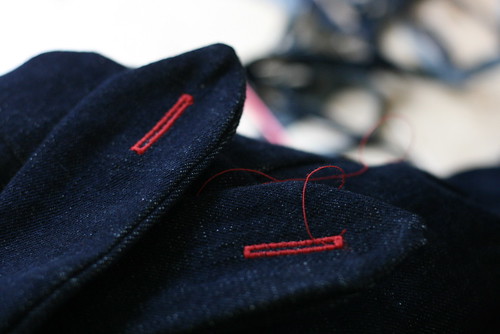 hi, your pattern arrived today. i cannot wait to try them out! i am a pattermaker myself and in love with all kind of patterns. yours are made with so much love and care! i have never senn such a cute pattern sheet!

I love your patterns! Unfortunately, the links aren’t working under the “In the shop” section.

I know I already commented on your Flickr page about this, but it’s so cute! :) Now I’m kinda thinking I should give this a try myself… I’ve got a 1940s shorts pattern (needs to be tested/fitted)… hehe!

(Those buttons are killer, btw!)

those look great. i love the casual-dressy combination. and that buttonhole is primo. nice.

Those buttonholes are PERFECT! What’s your secret? ;)

Roxanne, no secrets here! I just have a regular mechanical sewing machine and buttonhole presser foot. :)

oh that is adorable! i always love denim with red, and a playsuit, how fun! i think i need a playsuit in my life…

Oh my gosh, I love the play suit variation. You look ridiculously cute in it!!!

You should do a follow up post showing how to use iris pattern for this, if the iris would fit the bill?