Weekend Reading: A Transgenerational Quilt + Who taught you to sew? 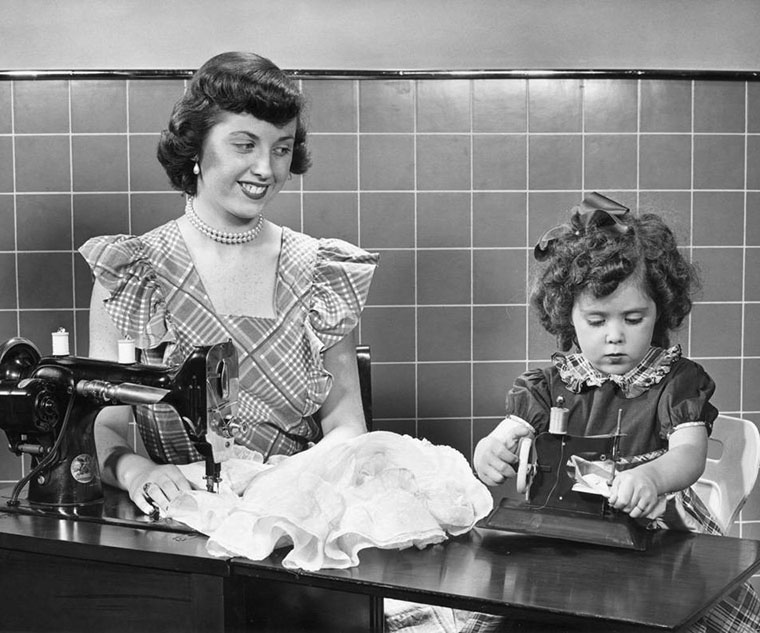 In “A Transgenerational Quilt“, Megan Hippler remembers learning to sew from her Grandmother, “I never felt more connected to my grandmother than when I was finishing the last line of stitches on the checkerboard quilt top.”

Many of us likely learned to sew from family, as sewing and quilting are rooted in the home. Do you have any handmade garments or quilts that evoke strong memories of family? Take some time to read Megan’s story, and join the discussion in the comments below.

And here are a few more reads:

For more links every week, you can follow us on Twitter, where we’re always posting interesting tidbits and discussions.

Sewing does run in my family. I learned from my mother who learned from her mother. I have since taught my children to sew. I feel we have lost many of the generational sewing. Many people today do not have mothers or even grandmothers who know how to sew. With so many community resources online like yours, I think sewing is making a comeback. Read my sewing story here: http://www.thelostapron.com/2013/05/my-first-sewing-machine.html

I learnt to sew from my mother. Who learnt from her mother, who probably learnt from her mother. Difficult to say as in those times and for familyies as simple as my grandma’s sewing was not a fashion choice, but an crucial skill in the household. My mother made it fun by using it to decorate the house and add flare to garments that didn’t satisfy her. I am, in turn, taking this a little bit further by learning patterncutting. I like the idea that every generation has added something so intimately “theirs” to the skill mix… I can’t wait to see what the next generation will bring!

I grew up in a family where the girls sewed, although I am not sure why, as my grandmothers either died young or had passed on already, because I was the youngest of six. My mom enjoyed needlework and taught my next eldest sister and me embroidery, but I think it was also an activity for girls my age in the 60s. My memories frankly are both good and bad. I was a lefty in a time and place where that was a bad thing to be, I was ‘weird’, and right handers generally gave up in frustration trying to teach lefties. My mom was a born lefty who was “corrected” by the Catholic nuns, and she was scarred by it. I was the only child in six who was a lefty too. No one had patience to teach me knitting, etc. Also, my father collected antique treadle machines, which I had to use, and hated. So, mixed bag, but you asked ?. But I kept with it through the years, on and off.

My eldest sister moved to NYC at 18 in the mid sixties and never looked back. She has been my major inspiration. She sewed all of her own clothes and shopped in the garment district of course, which she still occasionally visits from OR. She had her own design studio in the early aughts, but the Great Recession in ’08 ended that. She is mostly an artistic quilter now but we share project stories often. I only make my own clothes, and now that I have a sewing room of my own, I sew daily.

That’s my story. Thanks for asking! I would love to read the histories of other commenters.

I would like to add that the online sewing community has really added so much to the quality of my life, that it is my sewing family now, to which I am so very grateful to each and every one of you out there! Virtual hug!

I am from a family of women who sewed, although I feel mostly self-taught with a hefty dose of familial inspiration.

My grandmother earned her bachelor degree in Home Economics during WWII, a realization I put together only a few years ago – I hadn’t thought about how awesome it is that she went to to school, earned a post-secondary degree, and worked as a teacher during the mid-20th century. She also raised three girls who sewed their own clothing.

My own mother does not seem to have enjoyed the craft and process of sewing, as it was simply a way for her to build a wardrobe as a young woman. She dropped it as soon as she and my father were settled and RTW clothing became easily accessible and affordable. She did teach me how to use a sewing machine and we tried a couple sewing projects when I was a teenager, but she also taught me that fitting and adjusting were extra work (and certainly not something she enjoyed). In effect, I learned that sewing was a lot of difficult work and then I would end up with a garment that would never be worn. :/ That was the 1990s, too, and I don’t remember there being very many cool sewing patterns available! Now, my collection is huge and my wishlist is ever-expanding.

About a decade ago, when my grandmother was moving into an assisted care facility, we as a family were sorting and storing her makes from a long career of quilting and crafting. I realized how absolutely talented she was and how much she truly loved to make things and make them well. Although it was too late in her life for my grandmother to teach me, my own interest in sewing reignited and I proceeded to teach myself – the best way for me to learn anyway! I frequently turn to the online sewing community – one might even call me obsessed with reading sewing blogs and scanning Instagram for makes – for help, visual aid, styling ideas, and inspiration.

This is getting quite long, so I will wrap up by expressing how absolutely lucky I am to have a quilt that my grandmother made especially for me, another quilt that she made for herself (she passed away in 2013 and inherited it), and even a coverlet that my great-grandmother crocheted. I will always cherish these heirlooms!

I love that picture of the little girl and her sewing machine. I still have my identical sewing machine that my grandmother gave me. Out of six girls I was the one that enjoyed sewing. I sewed clothing mostly and advanced to home décor. I made my only daughters clothing until she was a teenager and preferred buying ready to wear clothes. When I retired I turned to quilting and enjoy it much more than sewing clothing. I am almost 73 and have had a wonderful life dedicated to creating what I deem as beautiful things.

What a great question! I learned the basics from my mom (on a singer treadle machine) and some in high school home economics classes. I purchased my first sewing machine when I got married for $149 including the cabinet and sold it 20 years later for $100! I have been sewing for over 50 years and although my mom was quite an accomplished seamstress – I never thought about where the sewing ‘gene’ came from. Neither of my grandmothers sewed, (other than mending), none of my aunts or great aunts either. I have no idea who my mom learned from, although now I suspect she was self taught. She was very creative and also did beautiful embroidery, knitted and crocheted and painted.

One of the things my mom used to tell us girls (I have three sisters – all of whom sew) was that there was no reason to look like you had no money in your purse. My guess is that sewing gave my mom the ability to dress herself and her children extremely well for very little money. We grew up having beautiful new dresses on all of the special occasions, and handmade gifts were the norm. Even today, I feel like I’ve ‘cheated’ if I purchase a gift for a new baby!

I cannot imagine life without a sewing machine! Although I work six and a half days a week, I still manage to sew almost every day and just about everything that I wear is me-made. My plan is to teach sewing to others when I retire in a few years because I believe that it is a life skill that everyone should have, that you should be able to mend and create and alter to suit yourself and that everyone is capable, with a little guidance.

My mother and grandmother taught me, so I associate sewing with family and with comfort. I inherited my grandmother’s first electric sewing machine – a gloriously robust Singer 201K(2) – and I really enjoy using it because it helps me to imagine what her like must have been like when she was in her 30s. My Mum lives a 3-hour drive away, but today we got to spend the afternoon working on some curtains together. That might sound mundane to many people, but for us it was an opportunity to be closer and to catch up.