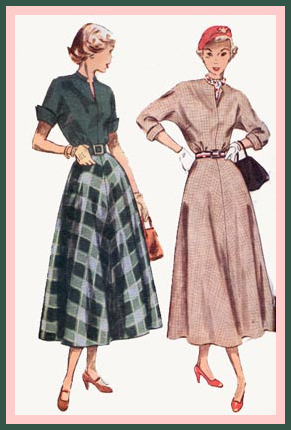 The kimono sleeve came into fashion for ‘Western’ women’s clothing towards the tail end of the 1940’s when the exaggerated shoulders which had previously been fashionable began to evolve into a more natural silhouette. As women’s fashion entered into the 1950’s, the fashionable silhouette for shoulders continued to move away from the large padded ‘Power’ look of the 1930’s/40’s towards the extreme opposite. A trend for petite and slopping shoulders emerged, alongside the nipped in waists, waspy hips and doll-like everything else, as a reflection of the demure and ultra-feminine stereotype to which society largely expected women to adhere. The kimono sleeve often fitted the bill for this look, as its construction method emphasises a continuous line between the neck and arm, subduing rather than highlighting the shoulder. 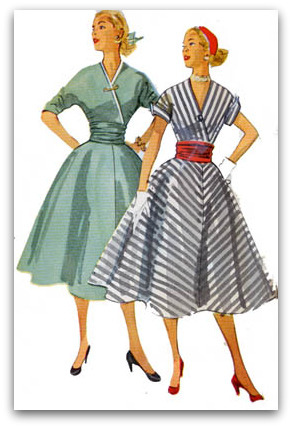 Also known as the grown-on sleeve in some pattern cutting books, basically it is formed by creating the body of a garment and the sleeve from the same continuous piece of fabric rather than separate bodice and sleeve pieces with a seam line running along the top of the sleeve as well as underneath to join the back and front. A close fitting kimono or grown-on sleeve variation may also include a gusset panel under the arm. This is a diamond shaped piece of fabric which allows for ease of movement. 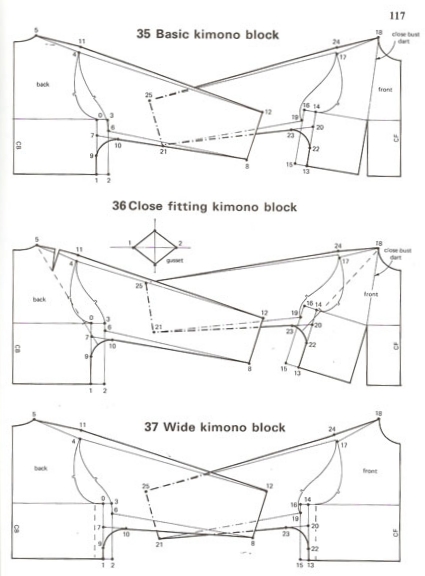 The kimono sleeve style became incredibly popular throughout the 1950’s and into the early 1960’s. Garments and sewing patterns featured a variety of lengths of kimono or grown-on sleeves, from the tiniest cap sleeve variation, to ¾ lengths and longer, with and without the underarm gusset; and as you can see by these images certainly looked a million miles from what many would imagine a garment with ‘kimono sleeves’ to look like! 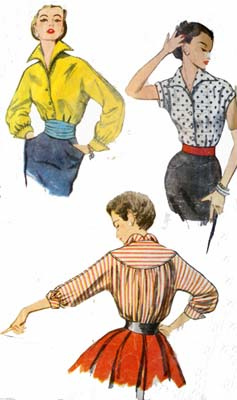 This type of sleeve has re-appeared in women’s fashion but has never achieved the same level of popularity since that mid-century period. Because of this, I have always associated this sleeve style with that period which is also the era of dress I am personally most drawn to. Therefore, it has become one of my favourite vintage features and an element I look for when hunting for vintage patterns on eBay. Some sewers dislike this type of sleeve as the look and feel when wearing isn’t often as ‘tidy’ as a regular set-in sleeve. Personally, I love the smooth and elegant effect these sleeves achieve across the top of the bodice or blouse, particularly when combined with a high straight neck and dipped back. 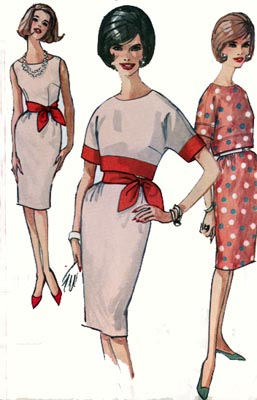 As I say, I’m a fan. I recently deployed a vintage pattern that featured grown-on sleeves to create my Rockabilly tribute dress (pictured below). Gertie made a stunning job of a kimono sleeved blouse pattern by matching the gingham fabric perfectly along the sleeve seam. What are your thoughts on this type of sleeve or silhouette? Any successes or failures to report? Any fit issues that arose? We’d (well, I’d) love to hear! 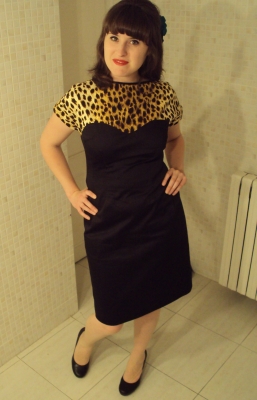 I made this dress: http://voguepatterns.mccall.com/v1044-products-8853.php?page_id=850 to wear to a wedding. It’s not totally a kimono sleeve as the bodice is not one piece (the sleeve + yoke are one piece). It turned out pretty good if I say so myself.

I think that this type of cut is also very forgiving if you tend to have shoulder fit issues. I have sloping, rounded shoulders that are much narrower in front than in back, and there was much less of the insane fit process than when I have to do a set-in sleeve.

I’ve been studying these sleeves as I’m contemplating fit and designs that suit my figure, so I really appreciate this post! I’m curious what the difference is (if any) between the kimono sleeve and the batwing sleeve. Some interpretations have them as the same style with different names. Others still seem to indicate that the batwing sleeve has more drape length between the shoulder and hip.

Love these types of sleeves. I have been wanting to sew a blouse or dress with this type of sleeve for a while, but I never get around to anything these days. Sigh.

I avoid styles with the kimono sleeves – I have broad shoulders with a really narrow back, and this style gives me a ton of extra fabric to deal with in the back area. I think they look really great on other people though (and I love that leopard print dress!)

I love kimono sleeves! I was not aware that they were so popular in the 50ies, so good to know where to look out for further inspiration. I always feel a bit like “taking the easy/lazy route” when I choose kimono sleeves in stead of set-in sleeves but thanks to this post, I know now that it a feature, not a bug:-) Thanks Zoe!

Easy to sew, easy to alter (once I figured out how.) What’s not to love?

i LOVE this.
so much easier to sew. i never seem to be able to fit proper sleeves perfectly – they just never match up for some reason.
I dont think its un-tidy at all. I think it gives a smooth feminine look.

I love them – so much easier than having to worry about where those pesky shoulder seems are going to sit!

The last two dresses I have sewn up have kimono sleeves, and they are just so much easier to deal with. I love it. I hate “easing the fullness” hahaha. I am a huge fan of the 50s kimono sleeve <3

I have made this type of sleeve on a baby jacket and LOVED how amazingly simple it was. I can’t wait to try it on some of my garments because I believe that fitting a sleeve into an arm hole it a whole lot of trouble!!

I made a tshirt with kimono sleeves (from this pattern by pixelink) and I had to scrap it because it looked really odd on me. I’d seen a bunch of other versions of this pattern that were cute on other people, but I am rather busty and wonder if that was causing the issue.

I think bustiness may be the issue. I’m also busty and i have had a lot of fit problems with kimono sleeves. If they’re short/capped suggest either lengthening the sleeve or making the garment sleeveless

I think kimono sleeves can be great in their 50’s incarnation, but should be treated with caution if you have wide shoulders. My shoulders are fairly square and just a little bit on the wide side. I’ve made 50’s inspired dresses with narrow kimono-sleeves with underarm gussets and with grown-on cap sleeves and loved them. However, I’ve only used the more batwing-like wider kimono-sleeve without underarm gusset on knits. For myself, I don’t think I would combine that sleeve with full skirts and I would always make it in soft drapey fabric.

Ooh I could have written this post! I have been on a big kimono sleeve kick at the moment- they suit my frame (narrow back and shoulders). They make such a refreshing change from set in sleeves.

This is one of my two favorite sleeve styles (the other is raglan). I didn’t realise that it was so popular in the 50’s and early 60’s though.

Why is this a favorite?…because I have narrow somewhat sloping shoulders in proportion to my size. It is much easier to get a mostly smooth fit if I don’t need to do MAJOR pattern alterations to the armscye area. I would rather have a slightly looser fit than have the shoulder seam of a set in sleeve end up halfway between my shoulder and my elbow.

You wouldn’t happen to know why they’re called “kimono” sleeves, would you? They’re nothing like a traditional kimono.

Hi – it has always been my experience that these style sleeves were called ‘Batwing Sleeves’ NEVER ‘Kimono Sleeves’. This comes from my years of making vintage patterns from as far back as Madame Weigel’s in the 1930’s as well as 1930’s – 60’s Lux knitting patterns. I have never known them to be called Kimono sleeves.

I love this kind of sleeves and I know them only as kimono type. Why kimono – no idea… I have to make some garments with this sleeves – in the end.

Curious regarding the shoulder slope on a garment like this. Assume there is just one, possibly
7 1/2″ from CB? If I am missing something please let me know. How else would one know where to raise the sleeve line too? Do hope I can get some info on this? Thank you