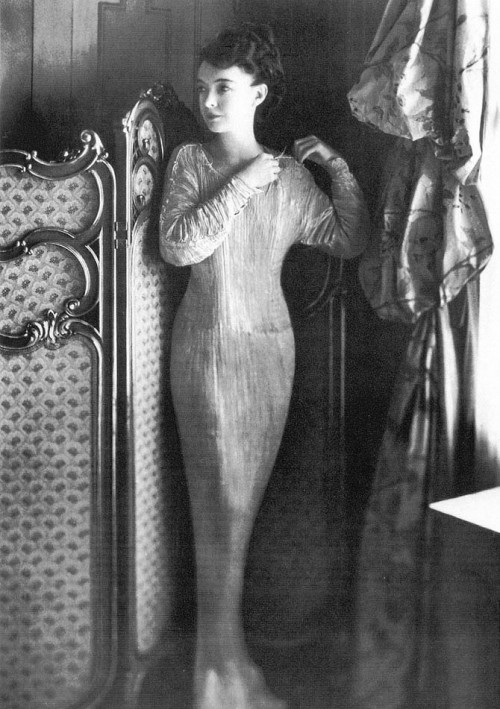 Though not a true couturier, by developing a hand-made dress that would never go out of style or impede a woman’s natural figure, Mariano Fortuny made a memorable name in fashion. A renaissance man of sorts, Fortuny was a painter, inventor, sculptor, architect, and theater technician. It was this last talent that led him to working with fabric. He started his career in fashion by designing costumes for theater productions. In one, he designed his Knossos scarf of silk, rectangular in shape, and printed with asymmetrical diagrams and patterns which could be manipulated around and on the body. This was where his fashion career began. 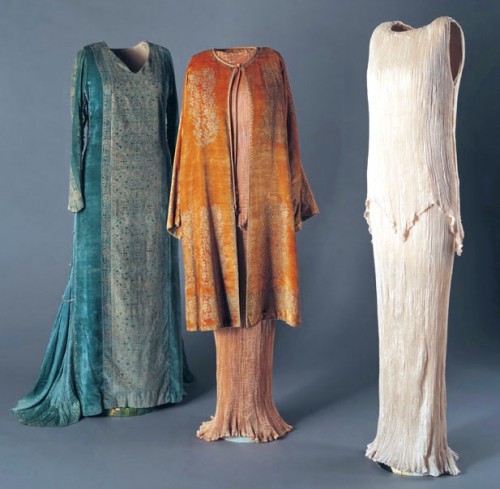 In 1907, he designed his Delphos gowns, robes whose unique fabric modification of mushroom pleating was patented in 1909. In all, he applied and registered twenty-two patents related to his many interests such as theater lightning and garment printing processes. 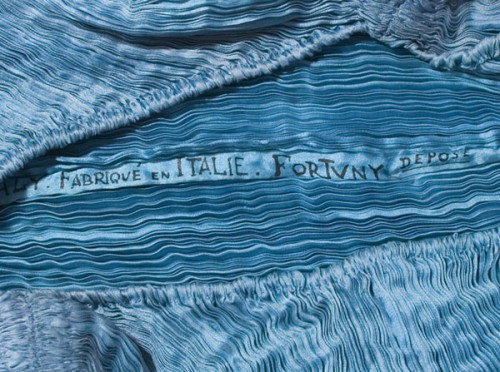 He created these silk dresses in rich and subtle colors, simple columns of mushroom pleating in one or two-piece tunics that slipped over the head and tied at the waist with thin twisted silk cords. Because of the elasticity created by the pleating process, the hems of his garments and their sleeves were weighted with hand-blown Venetian or Murano glass beads attached to silk cords. These not only served their function but also served as embellishment.

Though the basic silhouette and design of these timeless dresses rarely varied, it was his talent in painting and the specific dying and surface manipulations applied to the original fabric that made each dress or robe unique. In addition, the variety of the fabrics he used was multiplied by the fact that he invented processes for printing color and metallic inks on fabrics that could achieve the effect of either brocade, velvet, or tapestries. 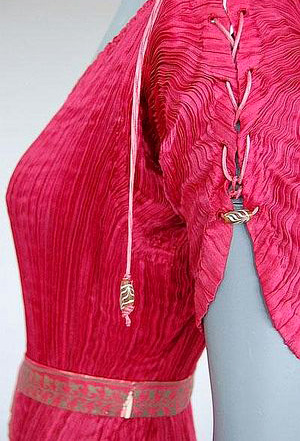 Hollywood Connection: His gowns were owned and worn by dancer Isadora Duncan and actresses Dorothy and Lillian Gish. More recently one could see Fortuny gowns in the 1997 film, The Wings of the Dove, with Helena Bonham-Carter, and styled by Sandy Powell.

I didn’t know about the Lillian Gish connection….btw, for those of you with iPhones, there’s a **free** Fortuny Fabric app. The fabric close-ups in there are absolutely amazing!

Oh…I love this post AND the dresses! How lovely!

He was not italian but spanish! Was born in Granada and raised in Paris…

Do you know anyone who can make these dresses today

Yes I do…These two designers have been making superb Fortuny like dresses since the 1970s in Wales with a shop in Paris. So have I, but gave up to become A Nomad, considering doing it again as all my work was lost, not however at Haut Couture prices this time!!! Here is a link to them…http://www.charles-patricia-lester.co.uk/.

He was my fathers grandfather.

Fortuny was spanish, but he lived in Italian. Only a little note. Thanks