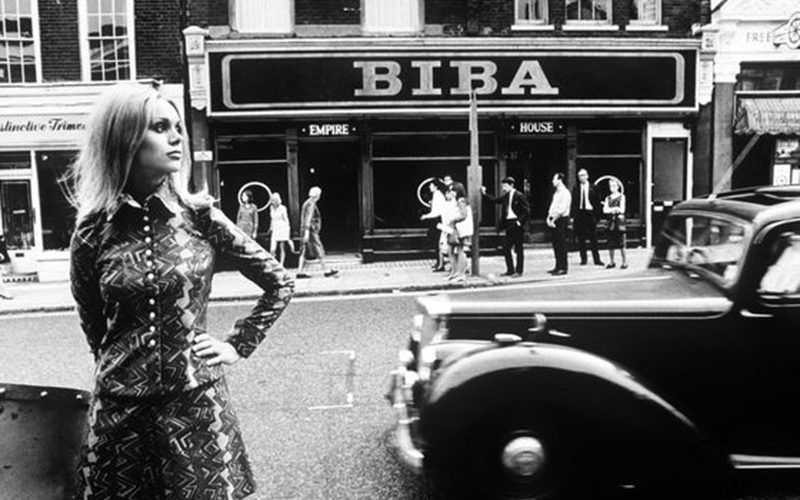 Earlier this year, I found myself in the fortuitous circumstance of sitting down with Barbara Hulanicki, legendary designer of Biba, to talk about her career. This came about because of my podcast, Hello Atelier!, where I visit with designers of all different mediums to discuss their process and work. I reached out to Barbara and, to my everlasting surprise, she agreed to be interviewed. Amidst the ocean and palm trees of beautiful Miami, I was a bundle of nerves; Barbara is one of my favorite designers – what would she be like? Would she be tired of talking about Biba? Would I get through the interview without looking like a total idiot? Well, she was lovely, happy to talk about Biba, and I think I did. But only just. 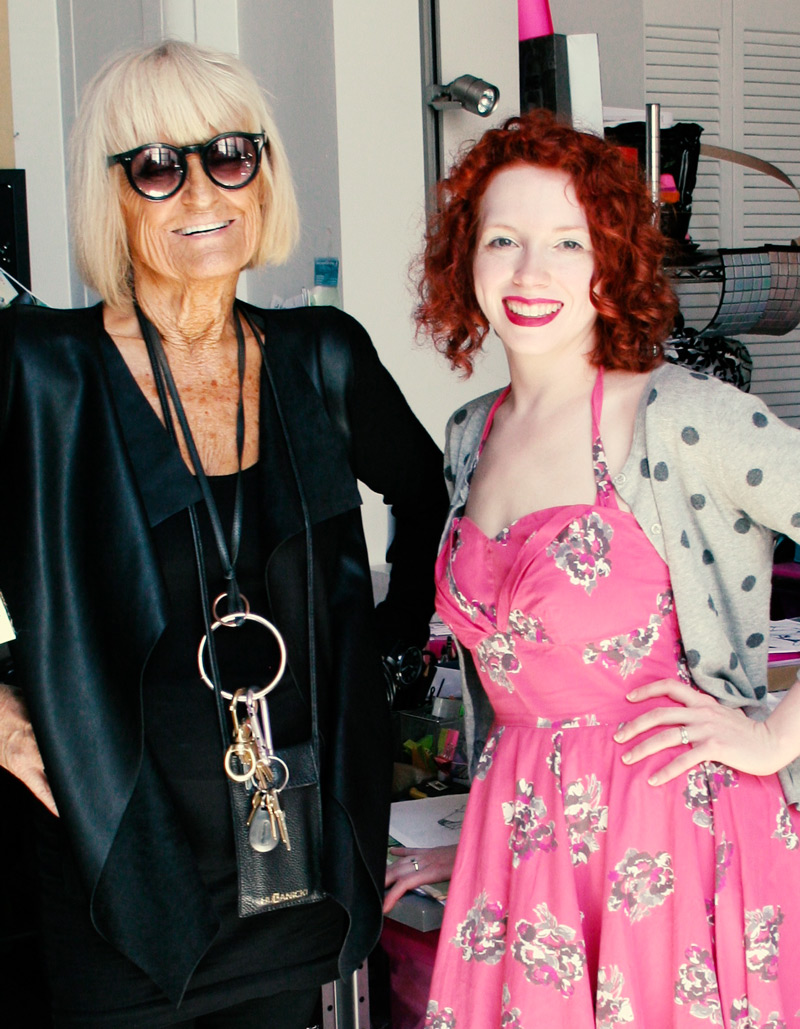 Barbara and I together – can you tell I’m excited?

Biba was the fashion label and store designed by Barbara and her husband, Stephen Fitz-Simon. They started the business in 1963 as a way for them to work together, and her youth-oriented designs immediately catapulted them to success. For twelve years, Biba was the place to go in London for everyone from office workers to rock stars like the Rolling Stones, David Bowie, and Freddie Mercury. By the time it closed, Biba had moved to a huge, Art Deco department store which they re-designed into a glam retail fantasyland. It is said that a million people visited that store per week. 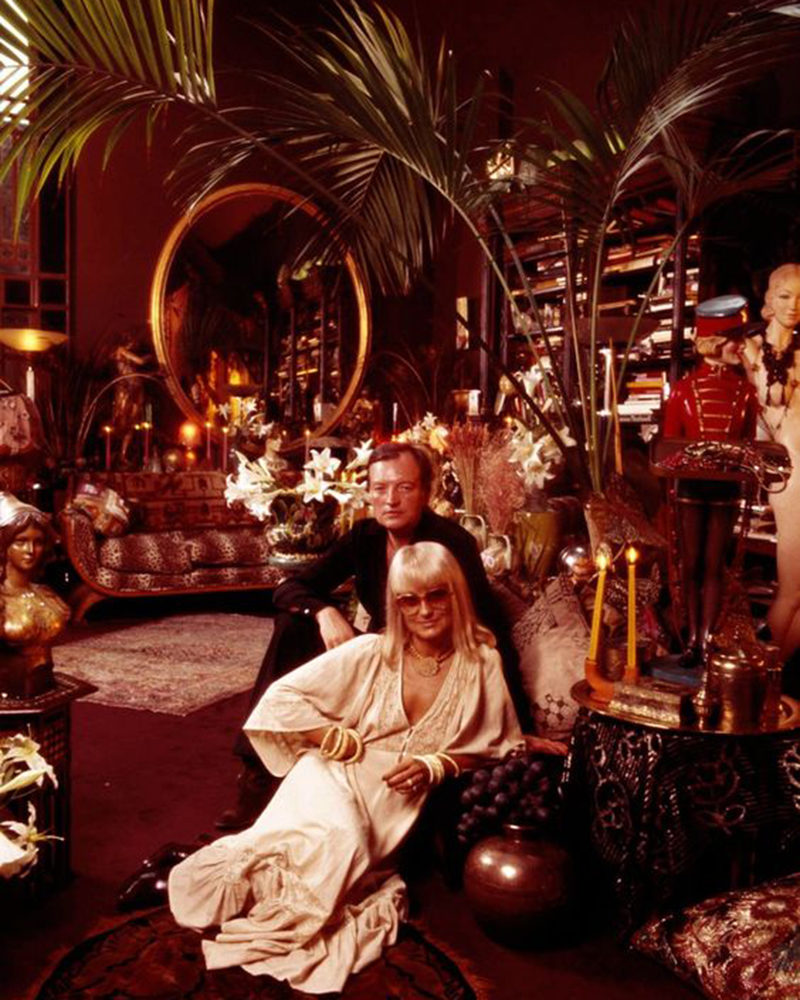 Barbara and Fitz at the height of Biba

Barbara’s early designs invented the 60s “Dolly” look that would prevail during the latter part of the decade. Her garments were designed square and straight—no hourglass shapes were found in Biba. This shape—which was perfectly suited for models of the day like Twiggy—would be the basis for all her designs, and even 12 years later her 1930s-inspired clothing still featured her signature square-shoulder look. Biba clothes also stood out for their muted palette. Barbara preferred a jewel-toned palette of dark purples, browns, and mustards that complimented the Art Deco interior of the store. 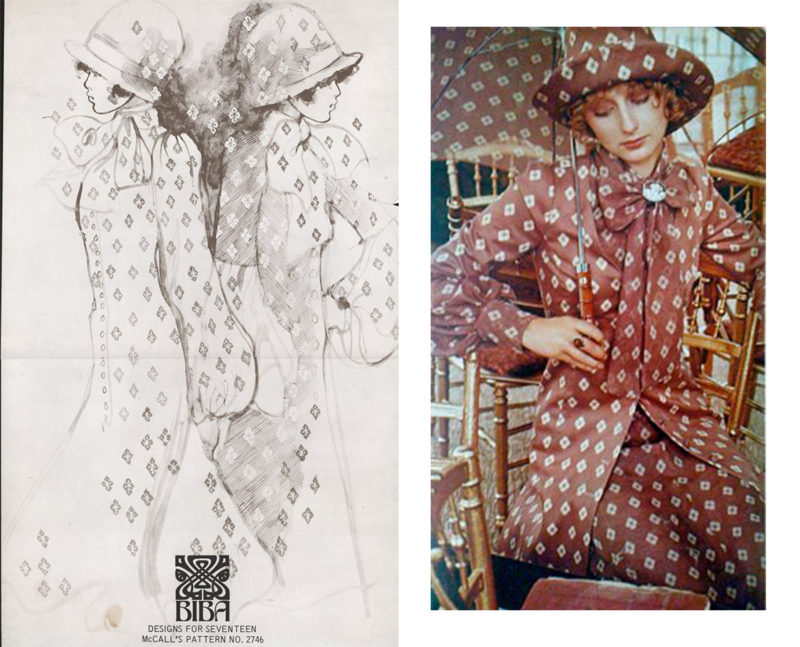 One of Barbara’s illustrations and a similar final garment.

What stands out about the Biba aesthetic for me is the joy in dressing up. Every day was an experiment with a new look and every look was an event. Before Biba, satin, velvet, and sequins were only for the evening. But the Biba girl would have no qualms about donning a velvet dress or satin trouser suit for a day in the office. 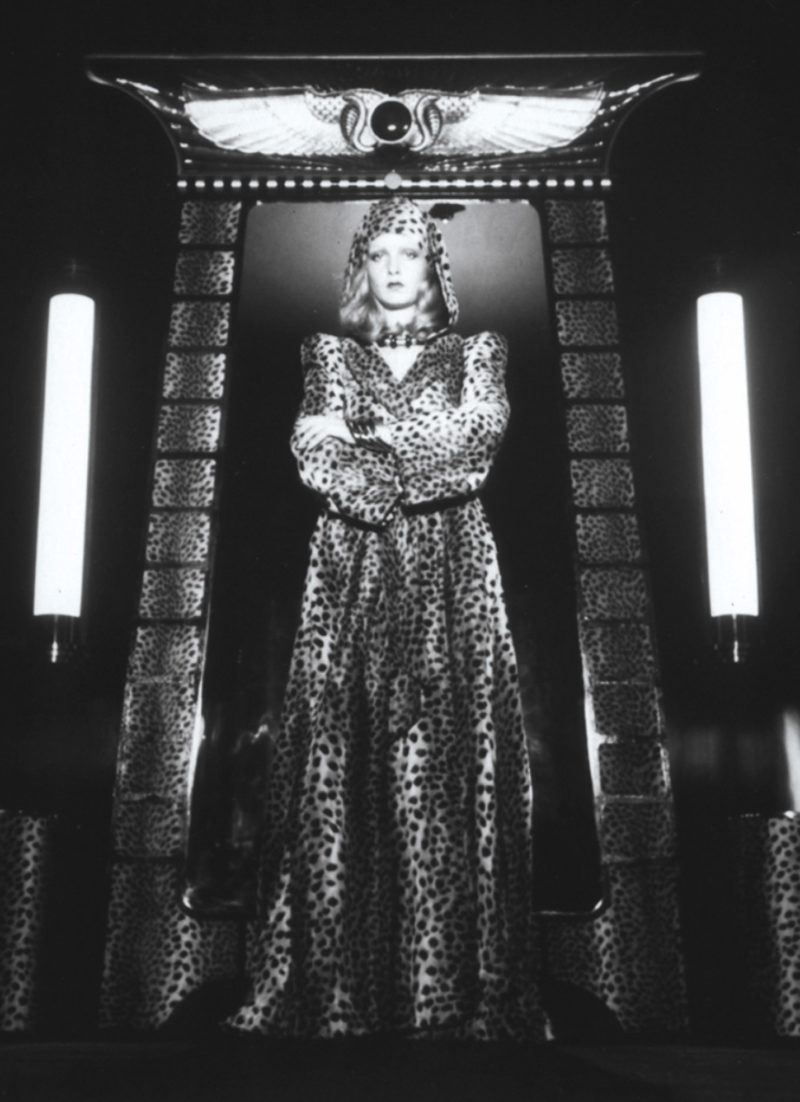 Twiggy in front of the Egyptian dressing room at Big Biba 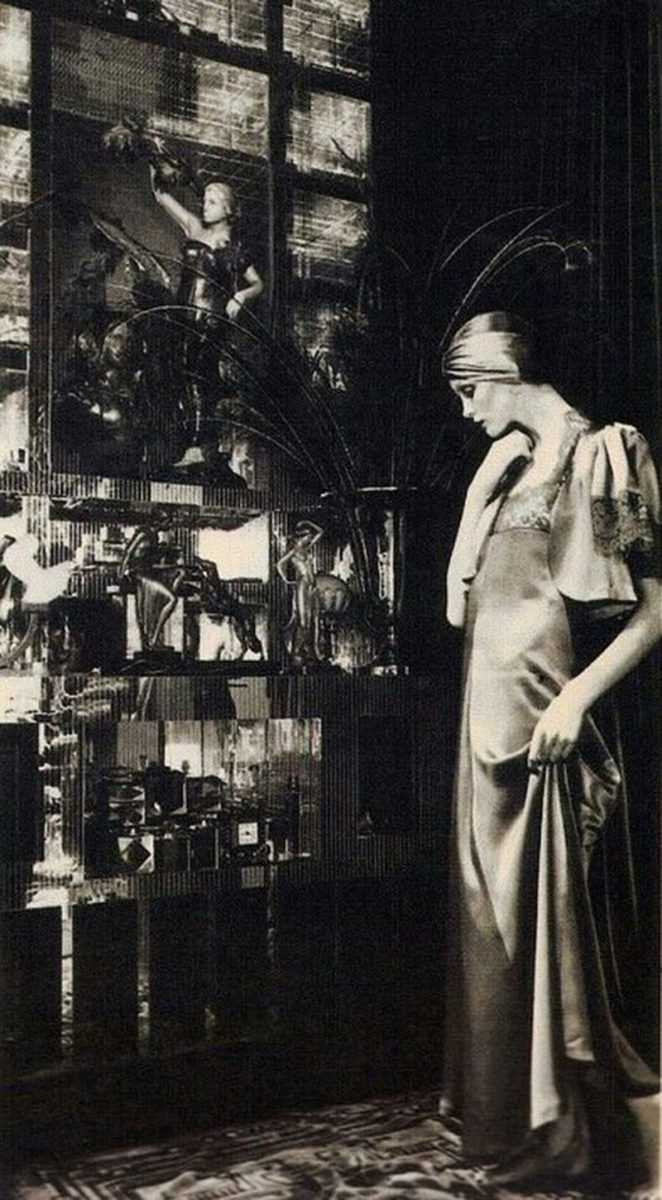 So, how does one incorporate that Biba glamour into their wardrobe? With the holidays approaching, you have a perfect opportunity to start wearing all the gold, velvet and satin you want! Here are a few ideas for Biba-inspired sewing… 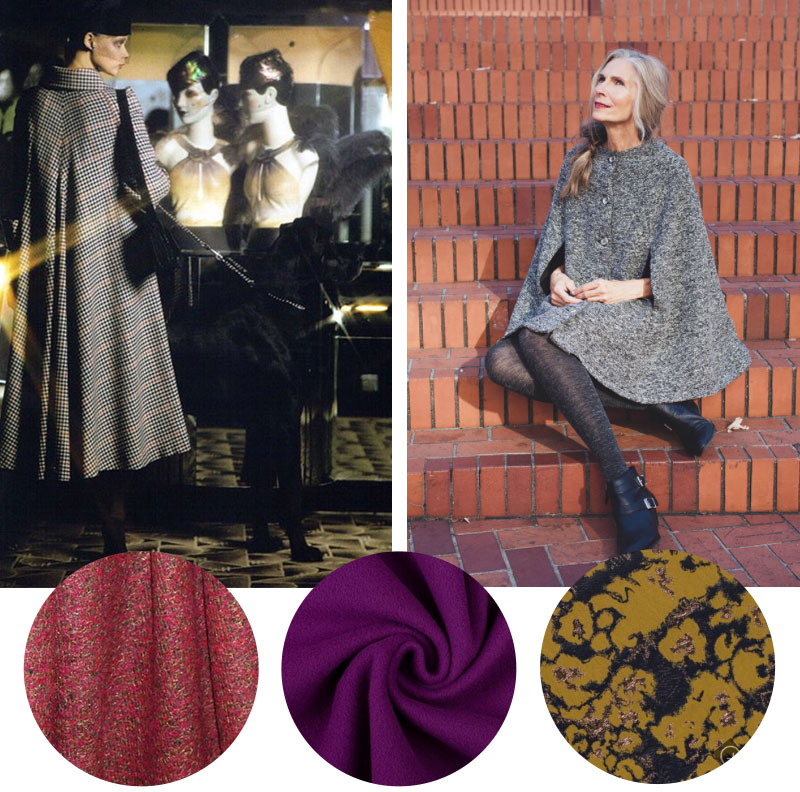 A glam holiday ensemble starts with outerwear. A Biba coat wasn’t just functional, it was a statement. Why not create a Seamwork Camden cape out of a luxurious purple cashmere coating or raspberry and gold tweed? Why not go full Biba with a metalic cheetah print brocade?! 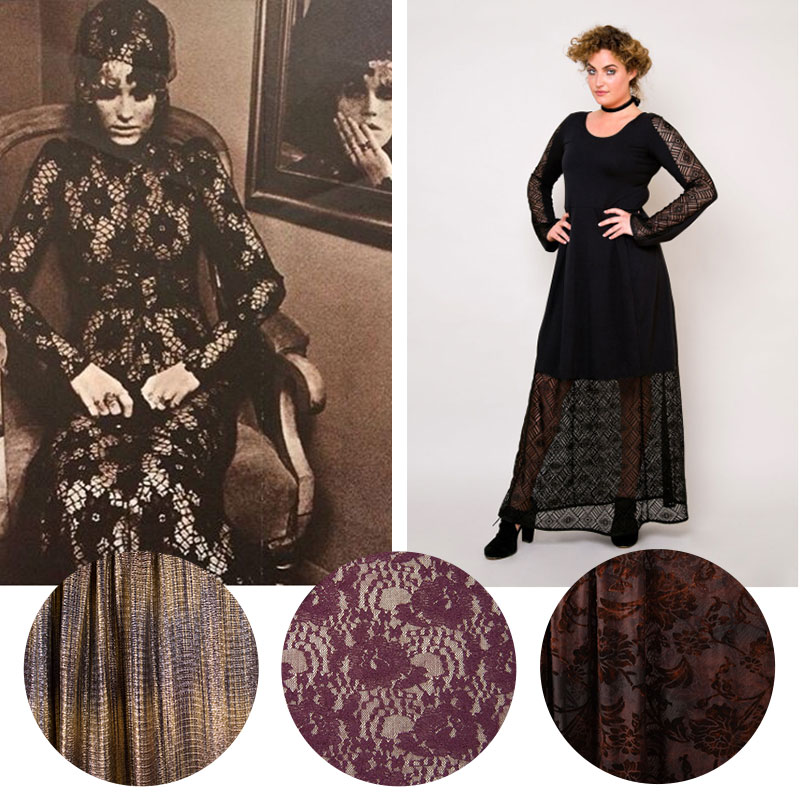 Nothing says the 70s like a maxi dress. Here are three fabrics to make a festive Seamwork Winona: a gold and eggplant crinkle knit, a plum covered stretch lace, and a rich copper burnout velvet. Don’t forget the platform boots! 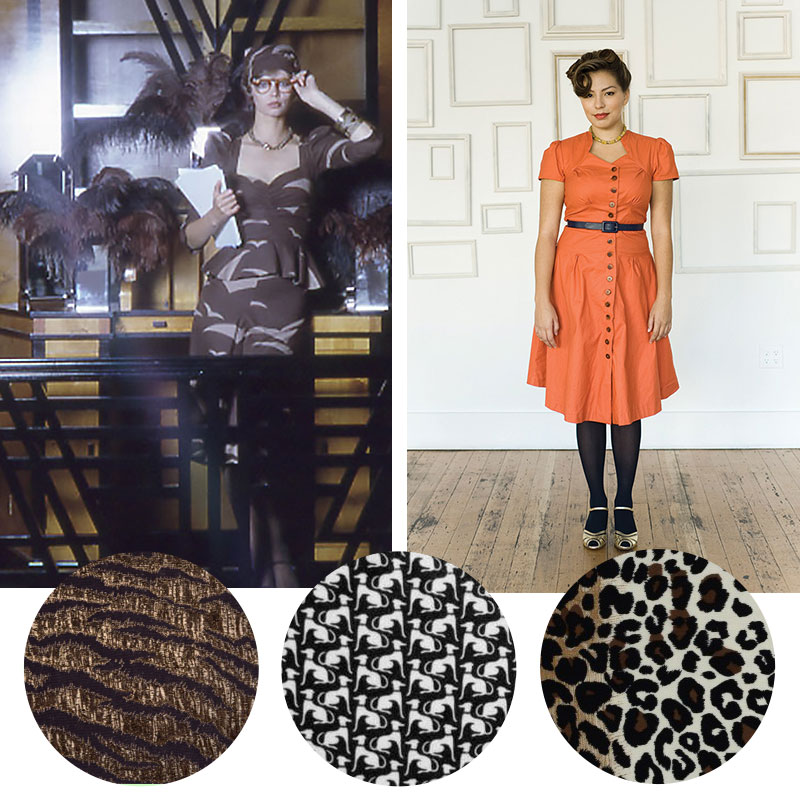 A square shoulder was a Biba trademark— and a nod to Hollywood glamour. A Ceylon dress made in a metalic jacquard or graphic bohemian print can go from daywear to eveningwear in an instant. Feeling feisty? Why not go for a full cheetah print?

The impact that Barbara had on fashion design and the retail world is too much for one blog post. Luckily many books have been written that cover her fascinating life and work. In fact, I am hosting a giveaway of six different, gorgeous, Biba books through Hello Atelier! These are books that hold an esteemed place in my library, and I hope they will in yours. To win one of six Biba books, simply click on the link below. To hear more of Barbara’s story, hop on over to Hello Atelier! 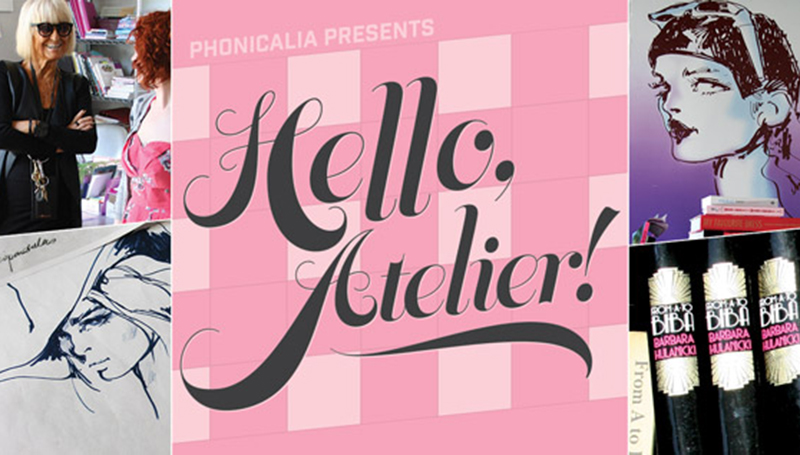 Betsy Blodgett is the host of the design podcast Hello Atelier! A fashion history and sewing enthusiast living in Kansas, she spends her time traveling, teaching, and moving cats off her sewing table. Follow her projects and inspiration on Instagram and Pinterest. instagram.com/Hello_Atelier pinterest.com/HelloAtelier

Thanks for sharing! I love BIBA and I needed to see this today! Barbara still looks amazing!

So glad to hear you liked it! And happy to hear you are a Biba fan! She does look amazing, I had to stop myself from staring at her while we talked – she has such a fabulous look!

Delighted to read this. I love “Biba” and read anything I can get my hands on about it. I recently did a sewing class near my home town only to get the fantastic suprise that the tutor had started her training Biba in the swinging 60’s. Wowza!

Trish, that is crazy! I bet she had some amazing stories! Was she teaching a garment course?

Betsy, you just made my day :-) As a teenager in the UK growing up in the 80’s/90’s I developed a fascination with everything 1960s. The bands that inspired me as a musician, the insane number of legendary British cars developed in that decade and of course the utterly fabulous fashions and fabric. To be honest I’ve never been “fashion forward” but I knew what BIBA was, I knew how important BIBA was to the way fashion had developed in the following decades, I knew who Twiggy was, I lapped up any TV show or book that featured the iconic shapes and gorgeous prints. I spent hours at my grandmother’s house looking at annuals that had belonged to my mother and my aunt’s when they were growing up, full of fashions from the 60s and 70s including tips on how to home make those looks, I’m sure that is what first sowed the sewing seed (!) from those old annuals I happily sketched “models” in BIBA style dresses although I lived (and still live) in jeans and a top. I shall thoroughly enjoy your podcast, it’ll be the first time I’ve listened so I’m glad you’ve shared news of it. I shall also be adding the BIBA book to my Christmas wish list. Sure there is still plenty of time to tell Santa ;-)

P.S. if only you could see the silly grin on my face… You really have made my day, thank you x

Wheelybad, I also grew up totally fascinated by everything “Swinging London” but I did it from Illinois! How lucky that your grandmother saved all those annuals for you to look through. I think my interest in vintage plays a big role in why I sew as well – it’s too hard to find my favorite styles ready-made. I hope you enjoy the podcast and I”m so glad to hear that you enjoyed the blog post- and if you are adding only one Biba book to your Christmas list, I would suggest The Biba Years which I can’t stop looking at. Though, the others are wonderful as well. It is my favorite stack of books in the house. Thanks!

Wow. A friend still treasures her Biba clothes now as when she traveled to “Mecca” (in her words) from Seattle during their reign; we lived in envy of the clothes she brought back, and worked very hard to duplicate that look back here (sadly my versions didn’t last). Thank you so much for this!

SJ Kurtz, Kudos to your friend for not only having the gumption to go all the way from London from Seattle to visit Biba, but also to keep a hold of her purchases! I envy everyone who got to experience the store, it sounds like such a magical place. Maybe it is time to pull out her Biba originals and try to recreate them again!

I remember the excitement of visiting Biba in London in the early 70s when I was a teenager. The colours, the fabrics…
I didn’t normally dress in Biba clothes, though – conservative area and no cash!

Anne, Even if you didn’t get to dress in Biba, at least you had the fun of visiting the store! I bet it was an experience!

love Biba had an eyeshadow in a metallic silver from back in the day. I think I still have it, could never throw it away, because it was from Biba.

Ginger, I would have kept it too! Some things you just don’t throw away!