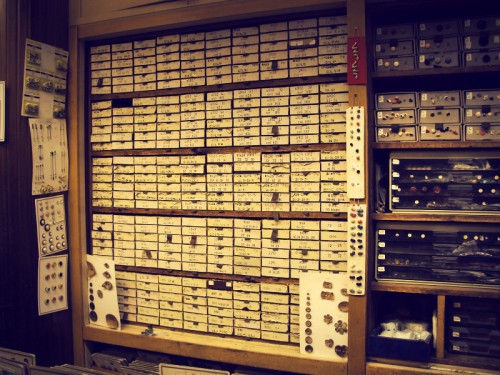 Moving to Barcelona introduced me to some of the simultaneously most fascinating and intimidating establishments I have ever encountered: Mercerias (Haberdashers)! Far more numerous than I have previously known, there seems to be a small Merceria on most residential streets, which are in addition to a few larger and grander Mercerias dotted about the city. As a non-native, I initially found both types of Merceria as terrifying as I found them alluring.

Aside from their number, the next big difference I noticed is that it is difficult, often impossible even, to browse their offerings anonymously. For example, the second you enter my local Merceria (Violeta, pictured above) you are invariably met with a forceful (some may say aggressive) ¡¡Dime!! (Tell me!!). After a few conversations in my limited Spanish that I hope have sufficiently conveyed my love of sewing I feel I have eventually won her favour, but earlier on in our relationship her bark was almost enough to have me running straight back out the door! 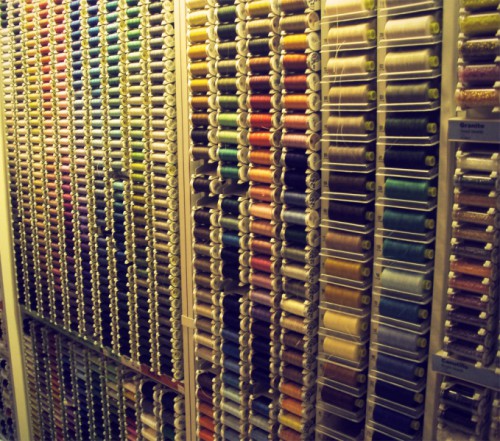 This situation got more confusing and scary in the larger stores where the number of customers is usually greater than the number of assistants. As in other queuing scenarios in Spain, I found out the hard way, that it up to the customers to organise and regulate themselves, and NOT for the assistants to clock whose turn it is next (like trying to order a drink at a bar). After waiting a frustrating half an hour for some self-coverable buttons, I realised that as a new customer approached the counter, they called out ‘¿Quién es la ultima? (Who is the last?), and someone responded to signify the end of the queue, and then in turn this new person became the last and responded to the next newby’s enquiry, and so and so forth. Recently I attempted my first ‘¿Quién es la ultima?’, which I found quite exhilatrating as where I’m from it’s not common practise to raise your voice in a sewing shop! 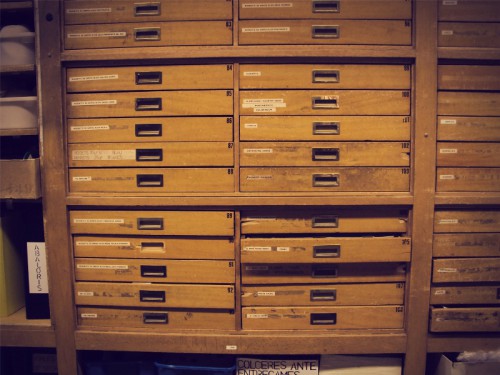 When the assistant behind the counter indicates that you’re up, non-Spanish or Catalan speakers better be ready to flex their vocab or have with you an example of what you want, because the standard method of simply pointing may not be applicable. Many notions like bias binding, ribbon and zips are often stored away from sight in a myriad of drawers, shelves, boxes and books that will be presented to you from which to make your selection.

If you are looking for buttons, you are likely to find yourself faced with a sea of sample display boards to hunt through. However, in some places you have to request the colour you’d like to before your search can begin.

Maybe it’s simply cultural difference and had I grown up visiting Mercerias then I would feel no loss, but I can’t help but miss the hunting and discovering that is possible in Haberdasheries where the products are visible and touchable. Occasionally, an interesting fastening or embellishment that is randomly chanced upon may result in a better direction for my creation than the one I had in mind and was planning on buying. Or maybe such a discovery will provide the inspiration for a whole new project. As beautiful, exciting and fascinating as the often antique shelves, drawers and boxes in many Mercerias in Barcelona are, I always have to control the urge to jump over the counter and have a good rummage myself!

Oh I can totally understand it must be intimidating to go in to one of those shops! My Spanish is not that good either and I would certainly prefer to just be browsing for opportunities and not have a set agenda every time. If you do get on more friendly terms with the owner, perhaps she (or he?) will let you browse by yourself in the future? It looks so appealing with all the old fashioned shelves and everything. Lucky you!

I have had similar experiences in craft shops in Italy – all their treasures are tucked away in drawers and boxes, making browsing pretty much impossible. Once again, I love your photos!

Zoe, would you consider giving me a tour of your favorite Mercerias the next time I’m in Barcelona, Violeta looks fab!

It’s similar here in Turkey, too, and can be very intimidating. There is no orderly line, though, so you have to handbag-and-elbow-out ladies who try to get ahead. Silence will get you no where; you have to know what you want and speak it out immediately or risk losing your place. It makes craft and sewing stores in the US seem tame. Where I used to browse before, now I make sure to have a list. I love shopping at these haberdasheries now, finding the right button or length of fabric, but before I knew Turkish it was such a challenge!

that does sounds pretty terrifying. i don’t know if i could make it through that. but look at all those little boxes! i’d want to dive in. when i lived in Barcelone, i was REALLY into the flea markets. they must still be happening, are they?